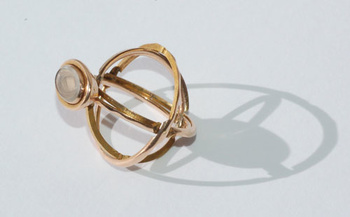 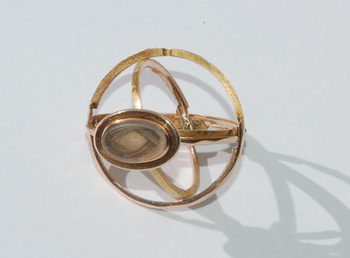 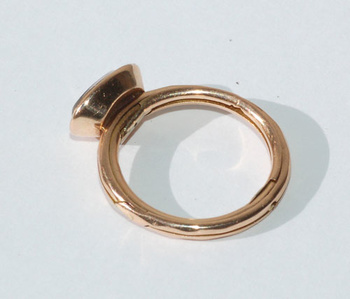 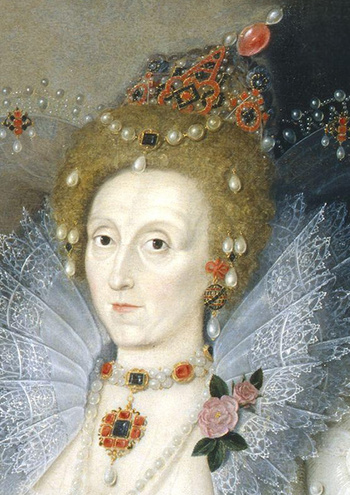 Amazing gold ring circa 1780, of interlocking hinged hoops which unfold into a miniature armillary sphere, with a crystal covered bezel containing a lock of hair. The interlocking hoops are concealed when the ring is closed.

Armillary spheres were used to show the movement of the planets around the sun, but the ring would not have been usable as such and illustrates the interest in science common in the 18th century.

Queen Elizabeth I often wore armillary sphere jewelry, which was highly symbolic at the time, used to represent wisdom and power and also as a symbol of the good relationship between Elizabeth and her courtiers

For example, the Hampden portrait of "the Virgin Queen" most likely painted in the early 1560s, shows an armillary, or celestial, sphere hanging at the end of a string of large pearls hanging from the Queen's waist. The device recurs in portraits of Elizabeth and her courtiers throughout her reign. The inclusion of an armillary sphere in the Hampden portrait is the first such example. It is thought to refer to the harmony which the Queen by her uprightness and wisdom has brought, and will continue to bring, to the kingdom: the religious settlement, the ending of the war with France inherited from her sister Mary I, and, perhaps by her marriage and child-bearing, a settled succession.

For other examples of rings, see Victoria and Albert Museum Collection Number M.368-1923, Plate 96A in Oman's British Rings and No. 193 in Scarisbrick's Historic Rings