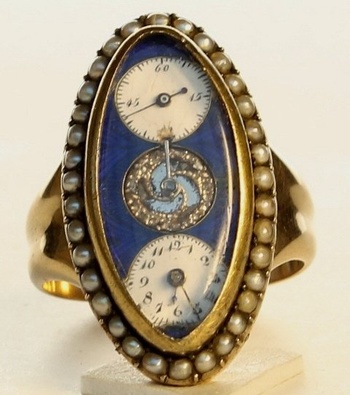 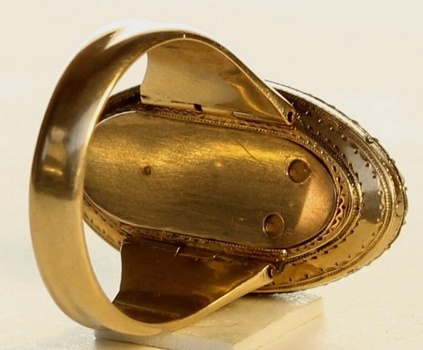 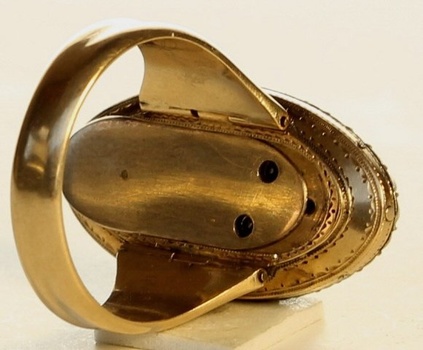 Ring Watch
Most likely of Continental origin
Circa 1800

Rare ring watch, with no manufacturing marks, circa 1800. The oval blue enameled face is set with 2 dials -- the top is the second hand and the bottom show minutes and hours. There is a central diamond set balance; the case has a split pearl surround and is 1 inch high and ¾ inch wide. The interior photos show where the winding key would be inserted. It is a very large ring, either for a man or worn over gloves.

A ring watch is listed in a 1618 inventory of the Prince of Orange, but the first version which told reliable time was created in 1753 by Pierre-Augustin Caron de Beaumarchais for Madame Pompadour and then Louis XV.

Some history of ring watches:

Very few makers were capable of making ring watches, considered as marvels of watchmaking. In 1753, Pierre-Augustin Caron de Beaumarchais invented a new escapement which he enclosed in ring watches for Madame de Pmopador and then for Louis XV. Additional makers, Piguet et Capt, Antoine Rojard, and Pierre Simon Gounouilhou started to produce ring wathes around 1800. There are records for approximately sixty ring watches from that period, only three are signed, or rather scratched (by Piguet et Capt).

Miniaturization in horology began in the 14th century. By the early 17th century, miniaturization was in full bloom. A German maker produced a small stack freed watch with a movement measuring only 10 mm, less than 4 ½'''! As early as the 1580s, watchmakers were fascinated with the idea of fitting a watch into a ring. Only a few succeeded. In the early days, successful attempts bedecked royalty.

In 1764, the young John Arnold presented an extraordinary ring watch to King George III of England. It was a half quarter repeater, less than two centimeters in diameter and had 120 parts. The watch brought fame to Arnold and established him as a very capable watchmaker. Czar Paul I of Russia offered Arnold double what George III had paid - already a small fortune of £500 - but Arnold refused. This ring is thought to be held by the Usher Art Gallery, Lincoln UK.