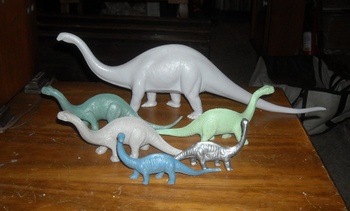 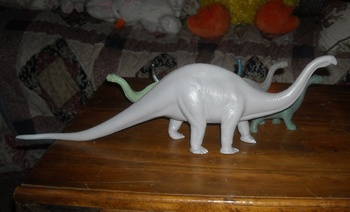 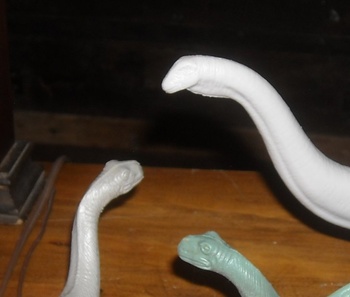 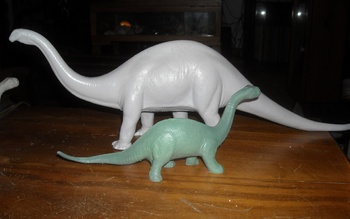 To celebrate the return of Brontosaurus I am posting all my brontos along with an "Apatosaurus". Brontosaurus was first put together using the wrong skull. The first skull was a Camarasaurus which became the most famed dinosaur image of all time. See the Sinclair dinosaur sign. Turns out the head was actually a bit smaller and because the name Apatosaurus turned out to be used first the official name was declared to be Apatosaurus. It means deceptive lizard vs Brontosaurus which means Thunder Lizard. Apatosaurus horrible name either way. Brontosaurus great name both ways.
OK on to the toys. The smallest is the MPC version from the 60s. In the middle is the Marx Brontosurus from the 50s and 60s, three different examples.
The largest one is the British Museum of Natural History version which has the Apatosaurus head. In picture three they have their heads together to show us the difference. Note they are in different scales.
Now the good news is that original skeleton has been declared to be a different animal than the one that was named Apatosaurus. Thus Brontosaurus is back.
The bad news is that the snake-like neck is wrong. Both Brontosaurus and Apatosaurus had a much straighter neck, the vertabrae would not be able to move that much. Same with the tail. The tail did not drag on the ground.
So Brontosaurus is back back not quite in the iconic version.