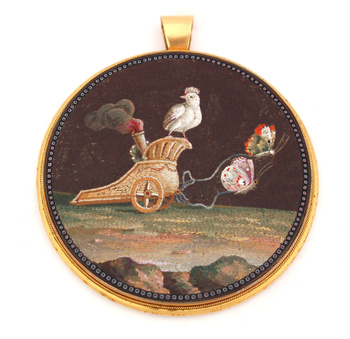 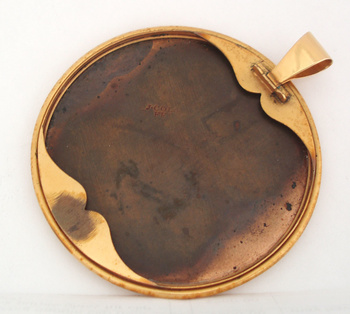 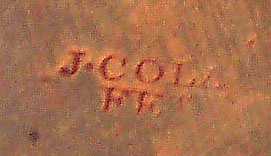 The earliest micromosaics had visible joints between the tesserae, a more limited color range, and a naive use of perspective. When you look at an earlier micro, you see the tiles in lines and where there are curves, you can see the underlayment.

This high quality micromosaic was most likely the top of a metal box and was later turned into a pendant. The lid is marked J.COLA, a mosaicist named Giacinto (Jacinto) Cola who was active in Rome at the beginning of 19th century and apparently one of the best ( Domenico Petochi: I Mosaici Minuti Romani dei secoli XVIII e XIX, page 54). The micro is 2 3/4" across.

Butterflies are a common representation of Psyche, often pulling a chariot. Cupid is frequently shown with wings and his symbols are the arrow and torch, "because love wounds and inflames the heart."

This depiction is unusual because Cupid is represented by a bird, but the torch in the chariot would be symbolic of Cupid. The colors are lovely and the scene is elaborate, though the perspective is flat. If you magnify the photo, you can see the tesserae are set in straight lines and you can see where the artist struggled with the tiles on the chariot wheels. But, the tiles are so closely set together it is hard to see the individual ones (especially in the brown background) without a loupe.

I am also going to post two later micromosaics of dogs showing the changes towards naturalism, due largely to the work of Antonio Aguatti.