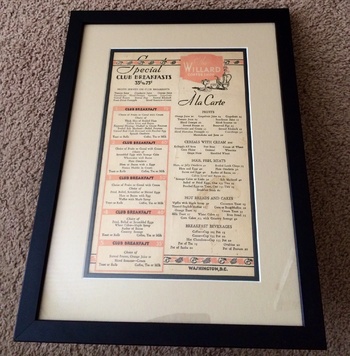 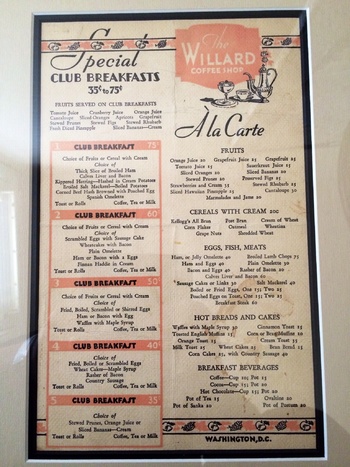 Picked up from my favorite Thrift Haunt, a vintage Menu from the Famous Willard Hotel in Washington DC. From the pricing I'd say from the 20s or 30s. Best thing is it was matted and framed ready to hang in the Kitchen .
Here is some interesting facts about the Willard.
The Historic Washington DC Hotel,
A most celebrated historic Washington DC hotel, the Willard InterContinental Washington, has been the focal point for elegant dinners, meetings, and gala social events for more than 150 years. An institution, this grand Washington DC historic hotel has hosted almost every U.S. president since Franklin Pierce in 1853. On August 28, 1963, the Reverend Martin Luther King finished his famous “I Have A Dream” speech while a guest at the Willard. Other notable guests have included Charles Dickens, Buffalo Bill, David Lloyd George, P.T. Barnum, Lord and Lady Napier, and countless others. Walt Whitman mentioned the hotel in his works; and Mark Twain penned two books here in the early 1900s. Throughout the ages, no phrase has raised eyebrows like “I’m staying at the Willard.”