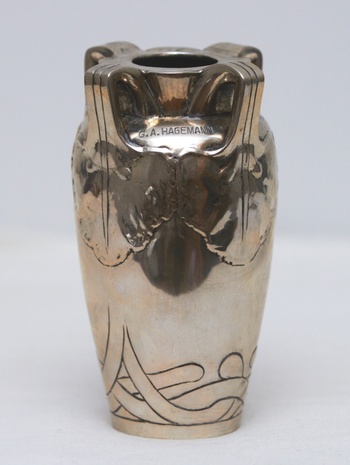 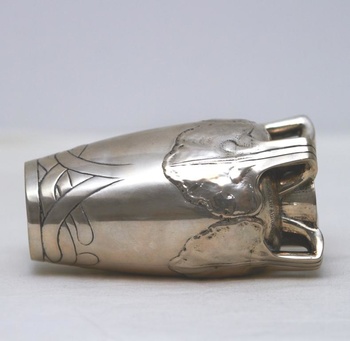 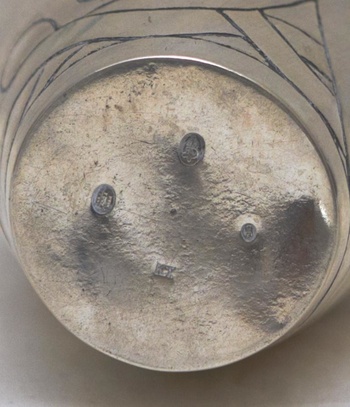 Silver vase with a typical early twentieth-century decoration, the so-called Skoenvirke style (similar to Jugendstil / art nouveau). On the shoulders the vase carries the inscription “G.A. Hagemann, 1. maj 1905, De Danske Sukkerfabrikker” (“G.A. Hagemann, May 1, 1905, The Danish Sugar Factories”). Normally I would not be interested in a vase with an inscription, but G.A. Hagemann (1842-1916) was one of the most important industrialists in Denmark in the years around 1900. A chemical engineer, he was the director of the Sugar Factories (1880-1897), the director of the Technical University 1902-1912, chairman of the board in several large companies, active in politics, he patented 13 different inventions, and not least founded the first hall of residence for both men and women (G.A. Hagemanns Kollegium) in 1908 – and that is where I lived when I was at university, hence my interest in him!

Initially I thought that the vase had been given to Hagemann, but as vetraio as pointed out (see comments below), there are more of these vases in existence, so it was probably given by him to some people who were somehow deemed worthy of this gift. It remains a mystery, though, what the occasion was. In 1905 I think he was a member of the board at the Sugar Factories, and thanks to his wise decisions the year was exceptionally successful for the company (despite general unrest and crises in many economies at the time), so maybe this was celebrated?

Height: 14.7 cm. Marks: to the left the three towers, indicating silver (originally used only in Copenhagen), below which the year 1905. At the top a monogram, perhaps ‘AB’ for silver smith G.A.F. Baentsch (1901-1944), and to the right the initials CFH for Christian Fr. Heise, the so-called ‘silver guardein’ (an official ‘guaranteeing’ that the object is made of silver), who was in office 1904-1932. Finally, a fourth mark I cannot decipher (possibly the dealer).