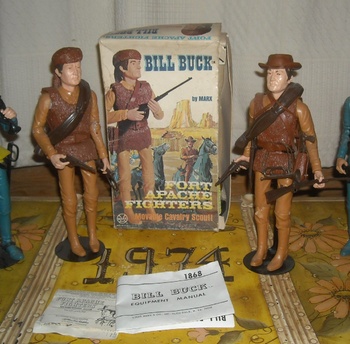 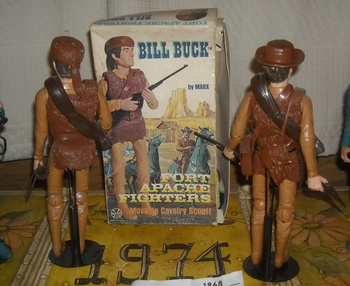 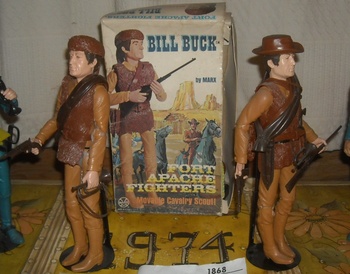 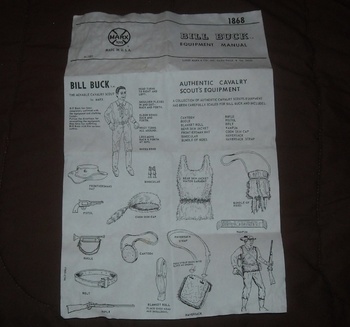 Bill Buck was the final addition to the 1967 Fort Apache Fighters line-up. It is the most difficult character in the series to find on the collectors market, as he was most likely only issued during for the 1967 season. (Certain 'FAF' foreign releases will also be a challenge to locate.) One point that adds to Bill's scarcity, aside from being made in lesser numbers, is that the caramel brown-colored plastic Marx used to cast the body has not aged well. As with the original Johnny West & Chief Cherokee figures, the caramel poly. plastic typically has become very fragile. Remember, these toys were never engineered to last 40-50 years.
Bill Buck has the head from Marx's Daniel Boone, issued in 1965 (and based on Fess Parker's likeness). The body was recycled from a project that Marx never issued -- a Jesse James character. Bill Buck didn't last long but his body was used again several years later, as Sherriff Garrett with a brand new head sculpt.
I have a pair of Bill Bucks here. The one on the left is held together with massive amounts of hot glue. The one on the right is intact and with all of his accessories that will fit on him although he can only wear one hat. I did add the knife and sheath which came with the Indian figures. An army scout would not be complete without one.
Special thanks to Glenn Ridenour of Fun House Toy Co for his help on this post.