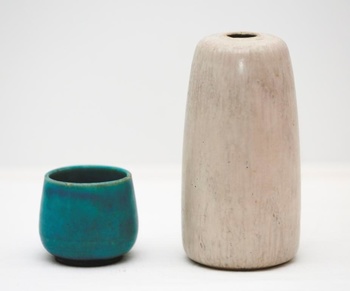 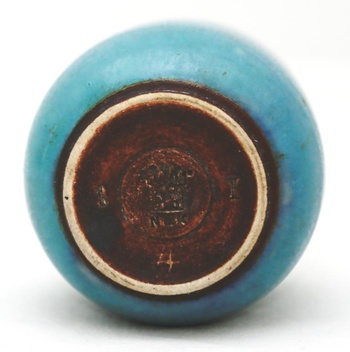 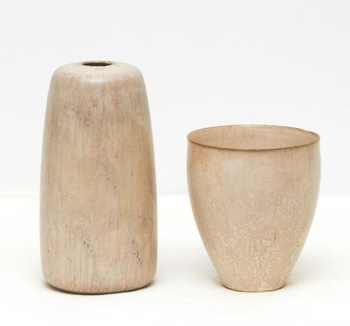 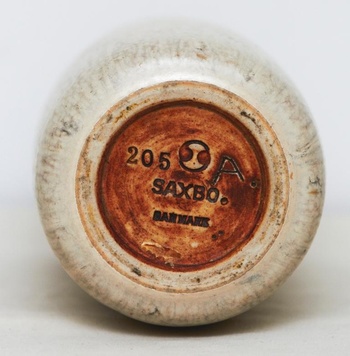 Just for comparison I now post three vases from the Saxbo Pottery (as a follow-up to my two Palshus vases posted yesterday). These tree vases come from one of the most respected potteries in Denmark, famed for the simplicity and elegance of style. It was founded in 1929 by the Swedish ceramist Gunnar Nylund and civil engineer Natalie Krebs and closed in 1968. In 1931 Nylund left to join Rörstrand in Sweden.

The small turquoise vase, which is marked with ‘N&K’ for ‘Nylund and Krebs’, was made in those first years before Nylund left. The white vases were probably made in the 1950’s – I am not sure by whom. The taller one is marked with an ‘A’ which could be Adam Fischer who was affiliated with Saxbo in the 1950’s. Saxbo employed a number of important artists, the most prominent one of whom was Eva Staehr Nielsen who worked there for a long time and designed a number of things which are classics today. Saxbo items are not difficult to come by – a lot is available at auctions and on markets – but it is generally quite pricey, perhaps because it fits so well into modern homes. The taller white vase was given to me by a friend and the two others I bought on markets (very cheaply as the condition is not good). I love the glaze on the smaller white one, with its little spots which make it looks like an eggshell! It is very similar to the glaze used on this Rörstrand vase:
http://www.collectorsweekly.com/stories/117932-rrstrand-vase-by-gunnar-nylund-sweden

Height of turquoise vase 6 cm, white vase 11.7 cm, taller vase 16 cm. Mark: the turquoise vase carries the mark used in the very beginning – a stylized flaming kiln and ‘N&K’ for ‘Nylund and Krebs’ and the others the mark used later – it looks like a yin-yang sign, along with a shape number, ‘Saxbo’, sometimes ‘Danmark’ and sometimes the artist’s signature.