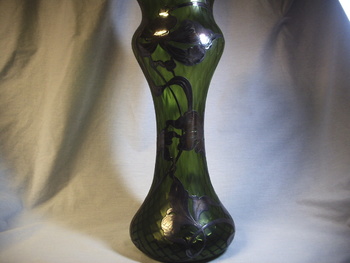 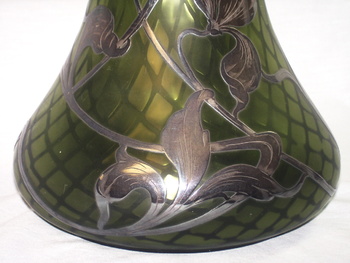 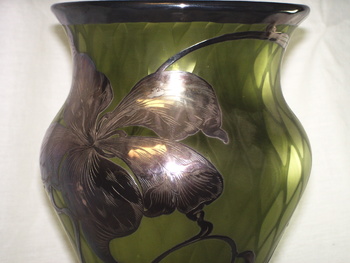 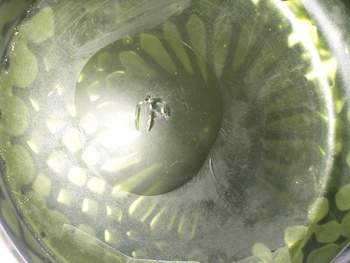 Hi
Everyone.
I am very,very Excited to post this Glass vase by Stauben American Glass Co.Attributed Steuben, Pomona Green Quilted Diamond Satin Vase With Sterling Floral Overlay,Art deco Style By La Pierre Mfg Co. New York Marked L Sterling Partially Effaced. Unsigned by Steuben.
This vase was Enormous, hard to gave is justice on the photo, but believe me this is a Museum piece.The Art Nouveau Sterling Floral Design Is with great detail complimenting The Pomona Green Satin Quilted Glass.
I will use those pictures for now, but realize, i will take better pictures outside.
Stand 18 inch tall,on a 5 inch base by 7.50 wide

Steuben Glass Works was an American art glass manufacturer, founded in the summer of 1903 by Frederick Carder and Thomas G. Hawkes in Corning, New York, which is in Steuben County, from which the company name was derived. Hawkes was the owner of the largest cut glass firm then operating in Corning. Carder was an Englishman (born 18 September 1863) who had many years' experience designing glass for Stevens and Williams in England. Hawkes purchased the glass blanks for his cutting shop from many sources and eventually wanted to start a factory to make the blanks himself. Hawkes convinced Carder to come to Corning and manage such a factory. Carder, who had been passed over for promotion at Stevens and Williams, consented to do so.

Steuben Glass Works started operation in October 1903. Carder produced blanks for Hawkes and also began producing cut glass himself. Carder's great love was colored glass and had been instrumental in the reintroduction of colored glass while at Stevens and Williams. When Steuben's success at producing blanks for Hawkes became assured, Carder began to experiment with colored glass and continued experiments that were started in England. He soon perfected Gold Aurene which was similar to iridescent art glass that was being produced by Tiffany and others. Gold Aurene was followed by a wide range of colored art glass that eventually was produced in more than 7,000 shapes and 140 colors.

These are a pair of handblown Steuben gold Aurene glass candlesticks designed by Frederick Carder for the Steuben Glass Works, ca. 1913. (From a private collection)
Steuben Glass Works continued to produce glass of all sorts until World War I. At that time war time restrictions made it impossible for Steuben to acquire the materials needed to continue manufacture. The company was subsequently sold to Corning Glass Works and became the Steuben Division. Carder continued as Division manager without any real change in the company's operation except that he now had reporting responsibilities to Corning Glass Works' management. Corning's management tried, mostly unsuccessfully, to limit the articles that Steuben made to only the most popular. Production continued until about 1932.

In 1932 there was a major change in Steuben management. The nationwide depression had limited the sale of Steuben and there was also a lessening of public interest in colored glass. In February 1932, John MacKay was appointed to Carder's position and Carder became Art Director for Corning Glass Works. Steuben then produced primarily colorless art glass.

Steuben still produced colored art glass mostly to fill special orders. A few new colors were added after Carder lost control of the company, but the last known sale for colored art glass by Steuben was in 1943.

The themes during this period included "balustrade" designs for water goblets and candlesticks, footed bowls and serving pieces. Decorative forms included wildlife pieces representing owls, penguins and other birds in smooth stylistic forms. Some pieces, such as the Ram's Head Candy Dish, playfully included clean lines crowned by an ornate design (a ram's head, complete with a ruff) on the lid as an homage to its classic earlier pieces.

The company also entered into the field of larger show and presentation pieces celebrating various scenes (such as its cut-away design featuring an Eskimo ice fisherman above the ice, and the fish below, or the Cathedral Window design) and elements that incorporated etchings. In some cases sterling silver or gold plating were used on metal finish elements such as the golden "fly" atop the nose of a rainbow trout. Each piece is signed simply with Steuben on the underside of the object.

Items from this period were also noted for their careful and elegant packaging. Before boxing, each Steuben piece was placed in a silver-gray flannel bag (stitched with the Steuben name), and then placed in a presentation box.