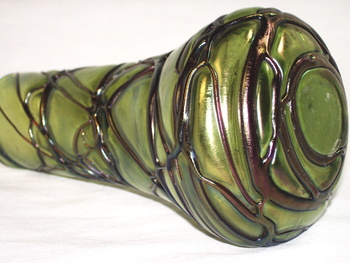 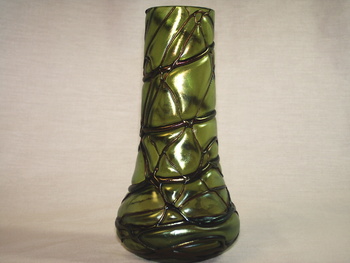 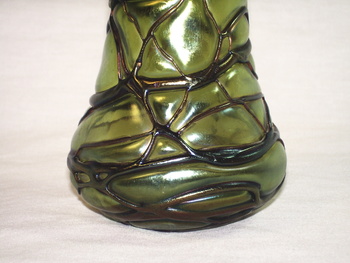 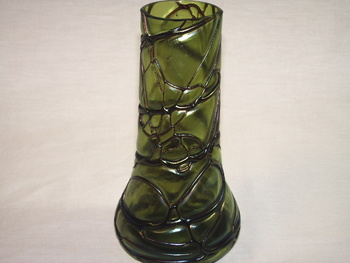 Hi
Everyone.
I found this nice Bohemian"Kralik"threated vine vase, few days ago with some other piece, i have being quite lucky lately for my finds.
I just love it, the second i see it, absolutely gorgeous color(my favorite) Green iridescent glow, no damage, in perfect shape.
This stand 7 inch tall, 3.5 inch at widest point, on a 2.25 inch base.

In 1888, Josef and Theodor Pallme-König named a new glasshouse after their mother: Elizabethhütte (103), name which is currently used by the Passau Museum in its glass catalogue to identify Pallme-König production. I asked Eddy Scheepers to illuminate this change; he corroborated Truitt’s account, adding that "Elizabethhütte" (or, as called in the catalogue, Glasfabrik Elizabeth) should be used as part of the scientific-ally-substantiated nomenclature, and "Pallme-König" as its popular translation, since both names cover the same production. In this article, I shall be using the latter.

In or around 1900, Wilhelm Habel, co-owner of the glassworks, obtained "a patent for a process to produce surface-decorated glass, a special type of decoration with glass threads encircling the vase" (Nedblake 11). After a review of Pallmé-König pieces illustrated in different European catalogues from collections and reference books, one comes to differentiate between merely threaded and "veined" glass. The first rests lightly on the vessel’s surface, usually having been applied in a concentric, regular fashion, and can easily break off. The second is applied in more of a free-form, irregular style, fused deeply into the surface and is more resistant to breakage.

Threaded glass was common to practically all Bohemian manufacturers-Loetz, Kralik, Rindskopf and Poschinger among them-, so its presence alone cannot be used to determine provenance. Other structural factors must be accounted for such as shape, the treatment of glass mass, and the way threading is applied. Just as the presence of metallic spotting does not constitute evidence of Loetz manufacture (see Rindskopf article), the presence of threading alone does not constitute evidence of Pallme-König. As to threading, the manner it is applied constitutes, more than anything, the signature of a given manufacturer.