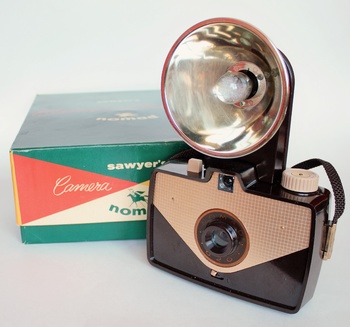 There were two film versions of this camera made. The Sawyer's Nomad 620 (pictured here) and the Sawyer's Nomad 127. Both were pretty much identical except for a few minor differences. The 620 was just slightly taller then the 127. Also, the 620 had a control switch underneath the lens which set the shutter for "Instant" and "Bulb". The 127 did not.
One other difference was that the 127 had horizontal lines on the bottom brown part of the camera face, whereas the bottom part of the 620 was smooth.

It was made from 1957-1963 and came from the same company that brought you the View Master stereo camera.