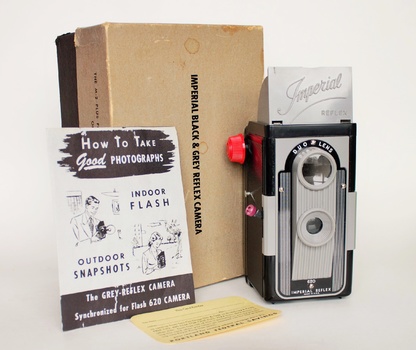 The Imperial Reflex. Sometimes called the Imperial Reflex 620 or the Oswald camera. It came in a few different colors such as a full black body with white trim, black with a grey face and chrome/grey with a beige face. There was also a version of it marked "Official Camera - Boy Scouts of America". It was made in the 1950's by a company named Herbert George and took 620 film. Not pictured is the camera strap and flash which also came with this camera.

**One other fact mentioned, is that this model, was used to take the famous backyard photos of Lee Harvey Oswald holding a gun before he shot JFK.**