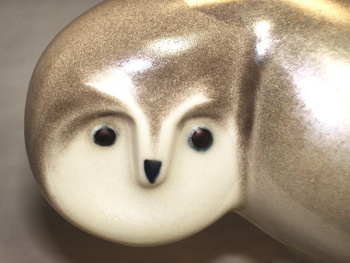 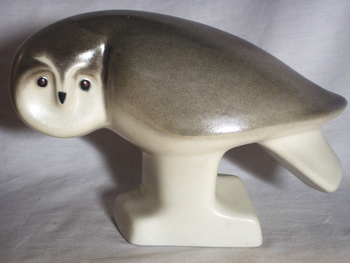 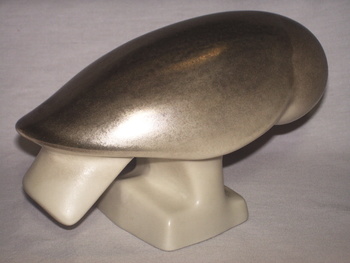 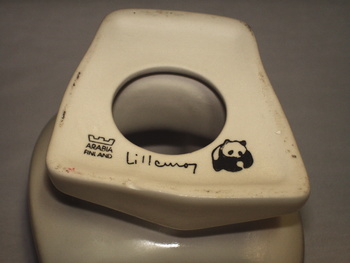 Hi
Everyone.
I found this nice little Owl today at the Goodwill 50 % sale, , i have seen this one also earlyer this week, again because i am the first in the line, i was lucky to get this one to, this little owl was design by Lillemor Mannerheim, manufactured by Arabia pottery Findland.Nice irridescent silver color, this little owl stand 5 inch tall, by 7.25 inch long, 5.25 inch wide.

Thanks for Viewing.
Alan
----------------------------------------1873-------------------------------------------
Arabia’s first factory buildings, for the manufacture of porcelain, earthenware and other types of pottery, were erected in 1874 on a plot of land carrying the same name on the northern outskirts of Helsinki. The buildings were commissioned by the Swedish ceramics factory, Rörstrand, which had been given permission by the Senate to establish a subsidiary in Finland on 25 November 1873. Production started in the Arabia porcelain factory in October 1874. Ceramics production in Finland was still in its infancy at the time, but demand was growing at a fast rate thanks to the booming economy. The Swedish company was really more interested in the Russian markets, but access through Finland via the Arabia factory was easier due partly to the lower import duties. Skilled workers were brought over from Sweden, supplemented by craftsmen recruited from other Finnish potteries. At the beginning of 1875, Arabia already employed 110 people. Within just a couple of years, the value of the output from the factory accounted for half of the total annual ceramics production in the whole country.
The Arabia factory was managed by Gustav Herlitz who had previously worked for Rörstrand in Sweden. The range of wares was expanded to include art pottery, domestic and utility wares, sanitary wares, tiles and even bricks.

During the first World War Arabia passed into Finnish ownership and by the outbreak of the second World War was larger than any producer of porcelain in Europe in terms of output.

As the oldest commercial manufacturer of porcelain, earthenware, and pottery in Finland, Arabia of Finland is a company of storied reputation and highly collectible vintage tableware products. The company's designs feature everything from traditional Finnish designs to ornate floral motifs, whimsical and rustic cow prints to warm earthenware place settings in brown and blue tones. Some of the most popular designs, particularly for serving pieces and place settings for everyday use, feature hand painted motifs from other European cultures, like the beautiful deep Mediterranean blues of the Valencia pattern and the solid brown earthenware and clean, bold Scandinavian design of the Ruska line. The company's line for children, Moomin, includes functional tableware pieces, such as cups and bowls printed with whimsical cartoon animals and people. The children's pieces are sought after by collectors for their fun and engaging character and charm as well as their rarity compared with the normal tableware pieces. Sellers on eBay offer a vast selection of Arabia of Finland tableware and place settings from a variety of patterns and designs, perfect as serving ware accents, collectibles, or conversation pieces.