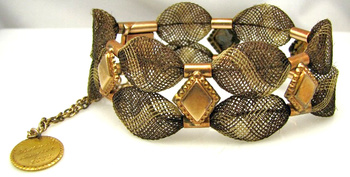 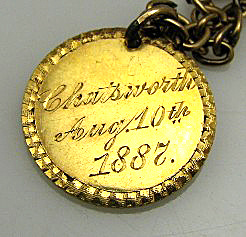 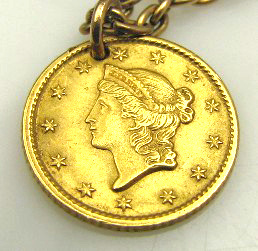 A two color, finely woven hair bracelet, set in 14K gold and with a gold coin attached marked Chatsworth Aug 10, 1887. I suspect this is a mourning or memorial bracelet based on the Great 1887 Chatsworth train wreck.
---------------------------------------------------
On the evening of Aug. 10, 1887, a Toledo, Peoria & Western train pulled out of Peoria, heading east through Eureka and Chenoa on the way to Niagara Falls. The train included two steam engines, six fully loaded passenger cars, six sleeper cars and three cars for luggage (and perhaps more cars) (the cars were mostly constructed of wood). Aboard the train were as many as 700 people who had been attracted by a special offer to visit the Falls.

1887 was a drought year in central Illinois. Worried that sparks from their steam engines could start an uncontrollable brush fire, on the day of the wreck the TP&W Railroad conducted a controlled burn near the bridge. Apparently the fire was not completely extinguished, and the flames severely charred the wooden trestle under the bridge, leaving it unable to support the train’s weight.

At a point about three miles east of Chatsworth, the train began to accelerate down a slope and reached a speed of about 40 mph. At this point the train began to cross a wooden trestle bridge over a creek. The first engine made it over the bridge, which then collapsed behind it, causing the second engine to slam into the hill side. Most of the cars behind the engine telescoped into the second engine and each other.

For photos and 1st person accounts go to: