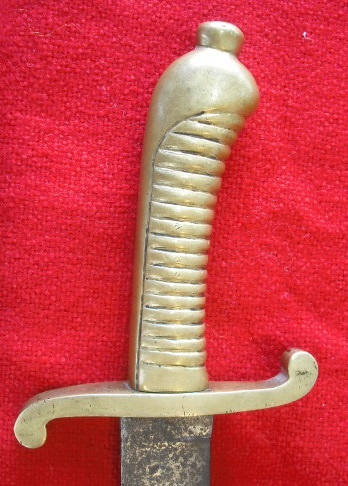 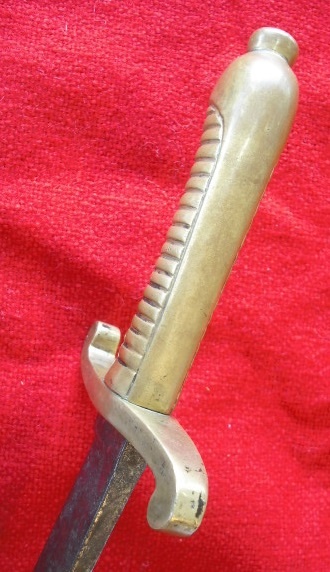 Anyway, a faschinenmesser (literally a “fascine knife” or knife used for cutting bundles of brushwood) was issued primarily for constructing field fortifications, clearing fields of fire, and hacking paths through the underbrush for the artillery to roll through. They were only secondarily a weapon of last resort. As a tool, the shape of this blade, and the heft and balance of it is that of a machete. As a 19th century soldier’s sidearm, the fancier hilt was in order.

There are a number of variations of the faschinenmesser, and as with many things, they often differed between German states, and there were Artillery, Pioneer and Infantry versions. This type seems to be mostly associated with Saxony, and several internet references list it as the model 1845. As of now I believe it to be the Saxon Model 1845 Infantry Faschinenmesser.

The 18 ¾” blade is almost 3/8 inch thick at the base, tapering to about 1/16” thick at the tip. The flat of the blade is 1 3/8” at its widest. Unfortunately it’s so pitted that any markings are long gone. The hilt is solid brass and makes a nice counterweight to the blade. There are no markings on the hilt, which opens up the possibility that this particular example was an export.