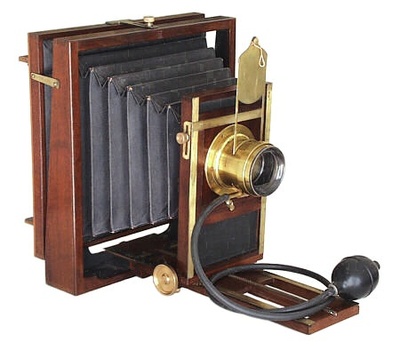 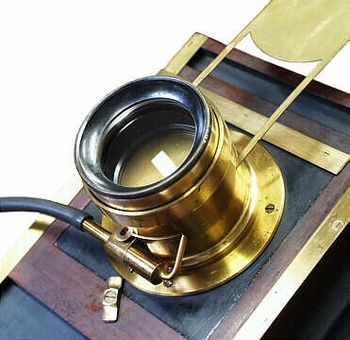 This is a really fascinating camera I sold many years ago. It is a handsome design but I simply ran out of display space. The body is made of fine polished mahogany with lots of nice brass hardware and a rotating back to change picture orientations (portrait to landscape).

The American Optical Company offered this camera from c.1886 to about 1898. This is a front focusing pattern. It means that the rear (where the glass plate is inserted) is fixed to the base and the front moves back and forth for focusing.

This particular camera is a large whole-plate model (6½ x 8½ inch format) equipped with a truly magnificent Morrison D lens and exceptionally rare (and quite cool) brass guillotine inter-lens shutter. This is a situation in which the lens/shutter combination is actually more interesting than the camera … then again, the camera body itself is no slouch.

Instantaneous shutters capable of making sub-second exposures first appeared in the 1850s, the earliest of which were drop or guillotine designs. The shutter is simply a vertical plate held by a frame inside the lens barrel. Most drop-shutters operated by gravity while others used rubber bands for faster speeds. The majority of drop shutters were mounted on the front of the lens and had a tendency to fall off or vibrate in use.

An inter-lens drop-shutter was made by carefully cutting slots into the lens barrel and mounting a pneumatic release underneath. The shutter release mechanism is an ingeniously simple design consisting of a finely machined mount and an air powered piston with a curved brass rod. The precision workmanship of the assembly suggests that the shutter may have been added by the original manufacturer. Squeezing an air-bulb forces the piston and brass rod outward from the lens allowing the blade to fall through the barrel.

Flammang's Patent Revolving Back Camera (front focusing pattern) was made in standard formats from 4 x 5 inches to 20 x 24 inches. The model posted here sold for $40 in 1892.