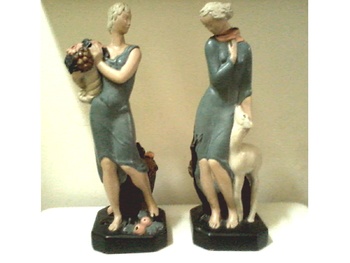 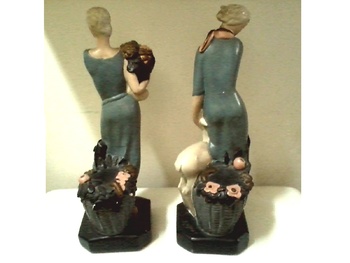 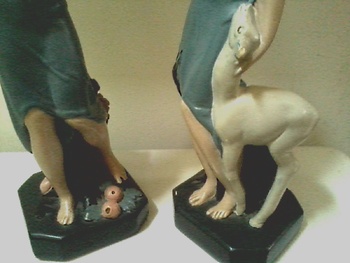 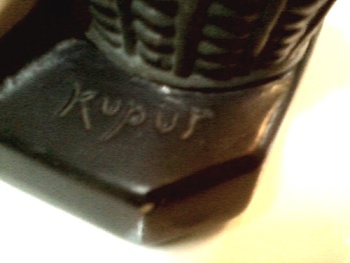 I saw these at my new haunt Savers the other day. I liked them but as usual I didn't buy them... then or this morning. I thought one was missing but it had migrated to another shelf. So I put them together again and left. I meant to look up the strange name on them (Kupur) but forgot...until about an hour ago. My search led me to the Ancientpoint.com site. They were calling it Vintage Italian Neo Classical Figurine marked Kuput (correction it's Kupur guys). The one they had was chipped and peeling so badly and yet they still had it valued at 200 USD !!
Mad dash 20 miles back to the store in weekend holiday traffic. Whew....right where I left them. These have only a few small nicks here and there.The deer on the one has a chip to the tip of his ear. Having a pair is always the best and if that site is any indication these could be quite valuable. They were marked only two ninety nine each ! -Mike-

Thanks Katherinescollections for giving me the correct name on the signature :)

Artist/Sculptor Frederick Cooper opened a studio in Chicago in 1923 specializing in Watercolors and Statues. At some point thereafter, he began producing lamps made from the sculptures/statues he was creating. This aspect of the business eventually took over most of his operation. In 1945, Cooper retired and sold the business, which kept his namesake. It turns out that as recently as the 1990's, Frederick Cooper Studios still controlled the trademark name "Kupur". All of the works I have seen signed "Kupur" are similar is signature style and are on works from approximately the 1930's-1940's. It is of my opinion that once Cooper retired, the "Kupur" line and signatures eventually were phased out while the company went on to have some success in the lamp making industry over the next 60 years. If you have a piece signed "Kupur" I believe it to be from Frederick Cooper Studios and was either done by Cooper himself or an employee of the studio.