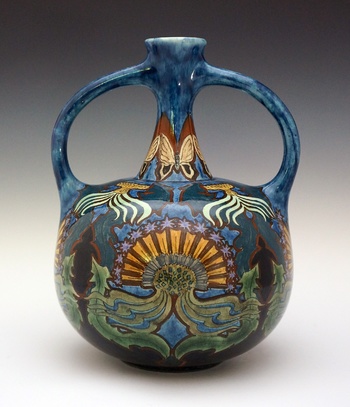 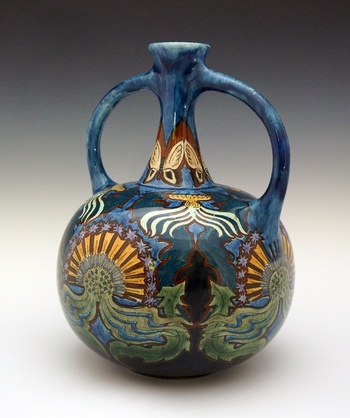 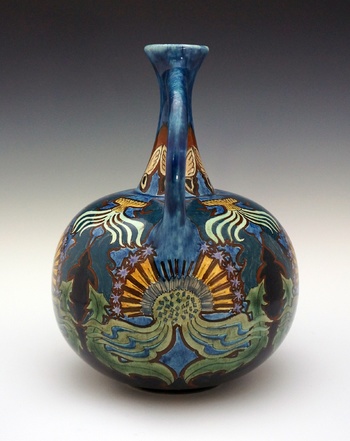 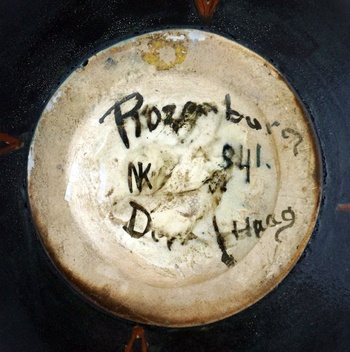 My first foray into Dutch Art Nouveau pottery, this Rozenburg handled vase has an ahead of its time psychedelic appearance with recurring motifs of butterflies and dandelions. Signed underneath with Rozenburg/ Haag and date marks denoting its creation in 1896, the piece appears to also have an early artist mark for Johannes van der Vet (1879-1954). Dimensions: 11" (height) x 8"(width).

In 1883, Wilhelm Wolff founded the Haagsche Plateelbakkerij Rozenburg aiming to produce traditional Delftware, but in 1884 when the pottery hired Th.AC Colenbrander as artistic director the firm was off in a completely new direction. The designs Colenbrander produced were revolutionary and it set the design tone for the firm for years to come. In 1895 J. Jurriaan Cook was appointed as artistic director, and the firm started to expand beyond Colenbrander's abstract designs. The firm produced earthenware pottery exclusively up to 1899, after which it initiated production of their famed "eggshell" porcelain, which was first exhibited at the Paris 1900 Exposition. In 1913, Jurriaan Cook left the company, and the firm shuttered its doors finally in 1916.