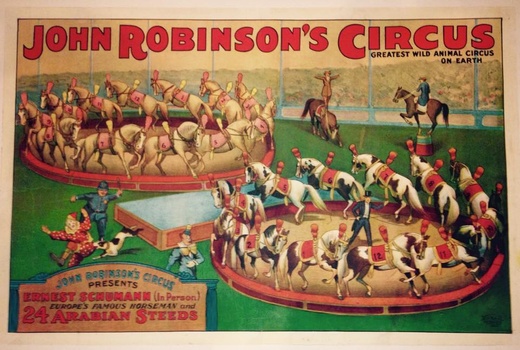 The Schumann family of horse trainers has a long history in Europe and their acts were occasionally seen in the United States.

According to horse trainer and performer Johnny Herriott, Ernest Schumann was hired by the American Circus Corp to train horse acts while the shows were at winter quarters in Peru, Indiana during the winter of 1923-24. His apprentice was a young Rudy Rudinoff (also spelled Rudynoff). During the 1924 season Schumann and Rudinoff each presented a ring of liberty horses on the John Robinson Circus as depicted in this Erie one sheet.

Schumann returned to Europe at the end of the season performing with Bertram Mills and other circuses on the continent. Rudinoff went on to perform for decades in various American circuses.