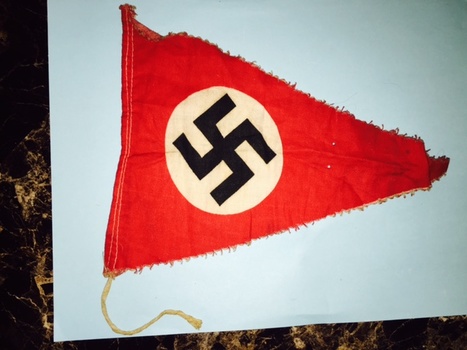 I found the same Nazi flag on the Eisenhower National Historic Site! It was in my dad's box of WWII items.

I copied and pasted the following information

Pennant
1945
This Nazi pennant was taken by GIs towards the end of the war. It has a handwritten note, "Germany Feb. 25, 1945," with the name and signatures of twelve GIs.

The situation for Nazi Germany worsened considerably in the winter of 1945. Warsaw, Poland, fell to the Soviet Army on January 17. While the Russians attacked from the east, on the western front the Allies began making major incursions into Germany itself.

Under cover of darkness, in the early hours of February 23, 1945, six American infantry divisions forced a crossing of the Roer River in Operation Grenade. As a result, a large area of Germany west of the Rhine was occupied. Two days into this advance, some of the victorious GIs autographed this Nazi pennant taken as a war trophy. The pennant is of the type used on German military vehicles in World War II.

With the 9th Armored Division’s chance capture of a bridge spanning the Rhine River at Remagen, March 7, 1945, the way was clear for the final battles. Private Alexander Drabik, a member of Company A, 27th Armored Infantry Battalion, and a native of Toledo, Ohio, was the first American foot soldier to reach the opposite side of the Rhine. For his bravery under fire, Drabik received a promotion to sergeant as well as the Distinguished Service Cross. The Rhine River was considered the last major natural obstacle preventing Eisenhower’s advance into Germany’s heartland.