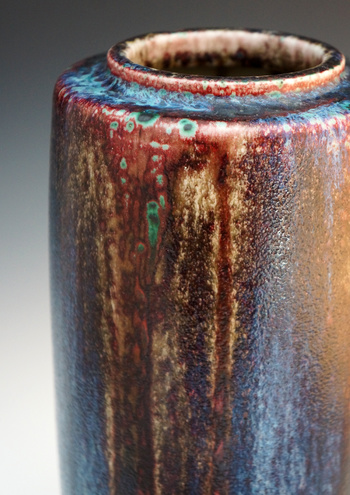 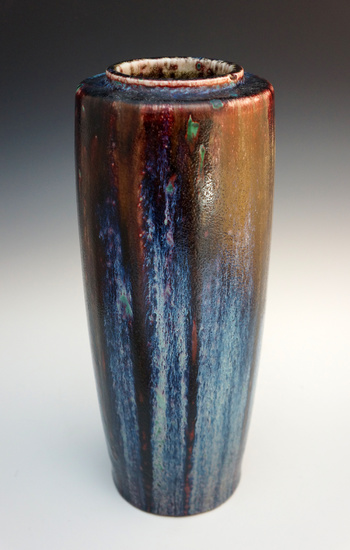 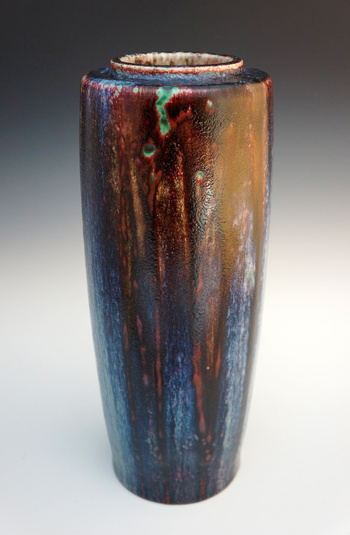 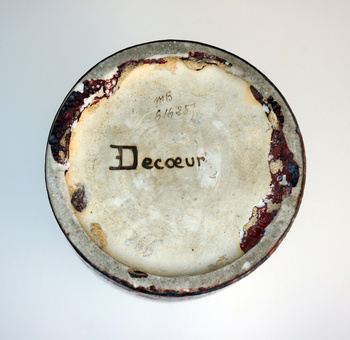 A large early proto-modernist form vase by Émile Decoeur thrown during his early solo career (circa 1906). The vase has a graceful, yet powerful, presence with a very slightly reverse tapering shape 4.5" (W) at the base and 5.5" (W) at the top. The vase is 13.75" (H). The flambé glaze on this piece is amazing with a myriad of colors and effects. Definitely one of the largest and most colorful flambé Decoeur pieces from this period that I have come across.
-----------
Born in Paris in 1876 and orphaned at the age of 14, Émile Decoeur's only formal art classes were evening drawing lessons taken during his apprenticeship. Because his work under Edmond Lachenal was signed only by the master, it is impossible to document his progress until 1900, when he was awarded a bronze medal at World's Fair as Lachenal's assistant. It was only in 1901 that Decoeur was first allowed to initial his work, always in conjunction with Lachenal's name.

Many of the most celebrated and beautiful pieces that issued from Lachenal's studio in the years after 1900 were designed and executed by Decoeur. Whether floral or abstract, Decoeur's work was marked by balanced proportions and strong, rhythmical lines. His pottery often bears rich flambé glazes in exciting combinations and with great depth of color. While assisting Lachenal in Châtillon-sous-Bagneux, Decoeur lived (and perhaps worked) in Paris, on the rue Charles Divry. He was still listed as the student of Lachenal in the catalogue of the 1903 Salon. But soon after its publication, Decoeur moved to 14-16 rue Gudin and set up his own atelier, "L'Art Céramique," where also ran a small gallery. During these years Decoeur continued in the organic, richly sculpted style he had practiced while with Lachenal.

Decoeur was joined by another young ceramist, Fernand Rumèbe (1874-1952), and the two worked side-by-side for the next three years. The years 1907-08 were a turning point for Decouer: his association with Rumèbe came to an end and, although he kept the Parisian gallery for a while longer, he moved to Fontenay-aux-Roses, a town just beyond Châtillon, where he set up kilns that he would use for the rest of his career.