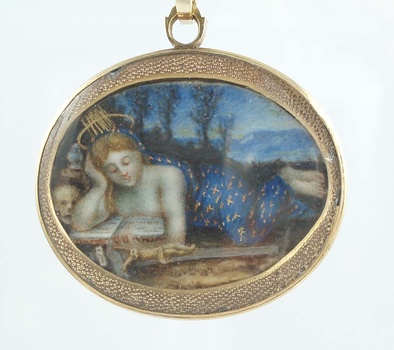 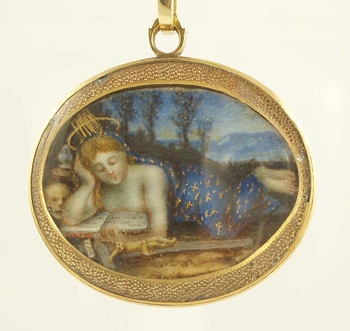 Unusual memento mori pendant for lives lost at sea - a watercolor miniature on parchment, under crystal and set to a gold pendant, circa 1720. The miniature is of Stella Maris, protectress of mariners and seafarers. She is portrayed in her lapis blue robe covered in golden stars and wearing a golden starburst crown. The skull, urn and crucifix in the scene symbolize souls lost at sea. The pendant measures 3 cm by 3.8 cm [ 1 and 1/4 inches by 1 and 1/3 inches].

Stella Maris is an aspect of the Christian Virgin Mary as spiritual guide. She is called Mary, Star of the Sea, and protects those who make their living on the oceans such as mariners and seafarers. She is shown on a lunar crescent wearing a starry crown, Her typical iconography, which likely references Revelations 12:1 of the Bible, which describes "a woman... with the moon under her feet, and on her head a garland of 12 stars." The moon of course also connects Her with the sea and its tides.