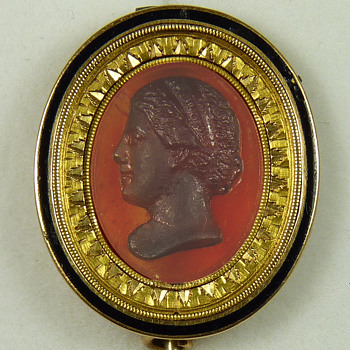 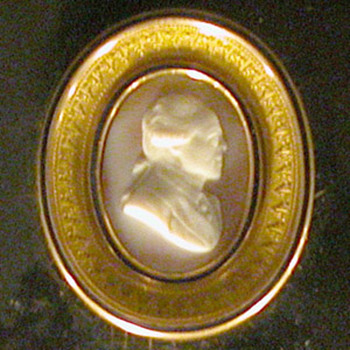 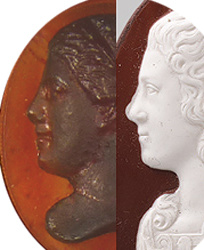 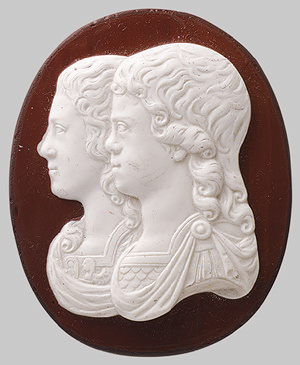 A few years ago a number of items with Russian interest surfaced in New Zealand. A Faberge box turned up in a household lot at a disposal auction and subsequently sold to Wartski for $87,750 (Webbs, 20 June 2012).

I found the Paul Lebas cameo of Alexander III and the Beilin bracelet I've shown previously on CW. I also picked up a great C19th filigree silver vodka tray, and some Harbin silver originating from the Pacific port where many White Russian emigres departed on journeys to new lives. A few of these White Russians even reached Australia and New Zealand.

At the time I reviewed hundreds, perhaps thousands, of images of cameos to help identify my Paul Lebas cameo, and I also bought research books such as Portrait Jewels, by Diana Scarisbrick.

When I saw this hardstone cameo brooch in a local auction I knew I'd seen something very similar, but where? Problem with browsing hundreds of sites, is how to retrace your steps? At the auction bored bullion buyers stopped bidding at a price just below what they could scrap it for, and I walked away with it.

This brooch is exquisite, it's only 24 x 20mm, around the size of a US quarter coin (0.95in diameter). The portrait is carved in a hardstone that's probably a carnelian, and it's mounted in hand chased and assembled high carat gold. Both the cameo and gold work are so fine that you can really only see them properly under magnification.

I would guess the style of the gold work is Neoclassical, which would date it circa 1770 - 1820. That date range helped me find where I'd seen the similar piece, it's the gold work that frames a cameo in the top of a snuff box that belonged to Paul I, Tsar of Russia from 1796 - 1801. The cameo of Paul I was carved by his wife Grand Duchess Maria Feodorovna, and the snuff box is in the Alexander Suvorov Memorial Museum in St Petersburg, hence the slightly blurry pic taken through a glass cabinet.

Is it a coincidence that my cameo portrait looks a lot like Maria Feodorovna? The comparison image is a self-portrait from another cameo she carved of herself and her husband, now in the Met.

So is this all just wishful thinking? Is there any connection with Russia? Or is my gold brooch a standard type, with gold work seen in several brooches of the period, set with carnelian portraits of women from a time when the fashion meant all women looked like this?

Probably, however I haven't found another similar brooch or gold mounted cameo anywhere as yet, despite a couple of years of searching.

Any help or comments will be gratefully accepted, even if they deflate my dreams.