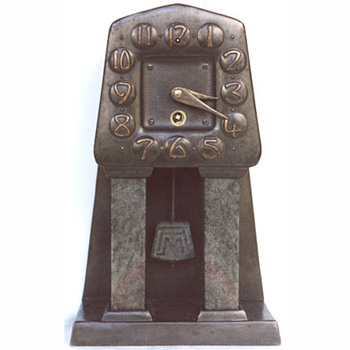 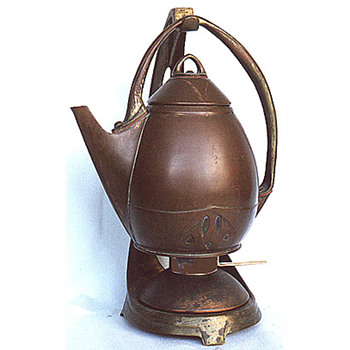 These are the actual pictures from my archive, of a couple of items I owned in the early 2000's, and subsequently sold to raise funds to buy my business.

Both were designed by Albin Muller, an architect and designer who was a leading light of the German Arts & Crafts movement. He joined the Darmstadt Artists' Colony in 1906, and after the death of Joseph Maria Olbrich in 1908 he took over the role of leader of the Colony.

I was in Budapest in 1996 in a cafe/bookshop and picked up the Taschen book "Design Classics 1880-1930" and flicked through the pictures, which included one of these clocks. I was doing the many Budapest antique shops at the time, and the next shop I went into had this clock in pieces in a box on the floor. I nearly fainted, and ran back to the cafe to buy the book, and once I was sure what I was seeing, began haggling for the clock.

A few years later, in the relatively early days of eBay, maybe 1999, I found the kettle, which also appears in the same book.

While I would love to still own these, I can never say I regret selling them, because they contributed to a new chapter in my life, which I would not have been able to start without their sale.