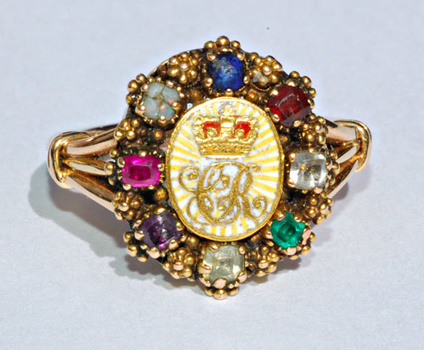 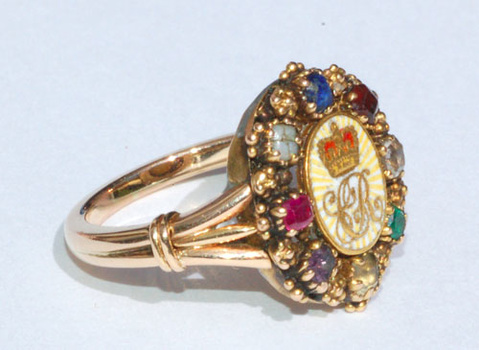 Though the King despised his wife, she was popular with the British people and also had many supporters of noble rank. George wished to divorce Caroline for her alleged adultery with an Italian manservant whilst traveling abroad, though he himself had many mistresses. The King insisted a bill be put before Parliament to dissolve the marriage.

The debate over this bill lasted for over three months and was effectively a most public trial of his wife. Eventually the bill was defeated but on the day of George's coronation, Caroline was refused entry to Westminster Abbey - the door was literally shut in her face.

Poor Caroline died two weeks later. On her coffin, a gilt plate was affixed with her own epitaph - here lies Caroline of Brunswick, the injured Queen of England.

This ring, for a supporter of the injured Queen, has a rayed enameled center inscribed CR for Caroline Regina under a Royal Crown. It is surrounded by stones spelling her name in the acrostic manner -

The center has been re-mounted in a later setting. A most poignant item of Royalist jewelry.