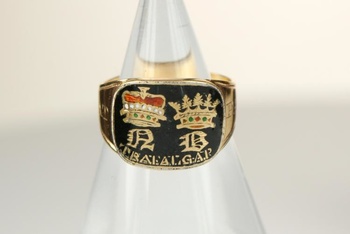 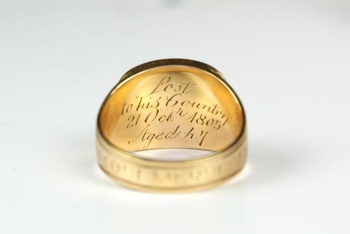 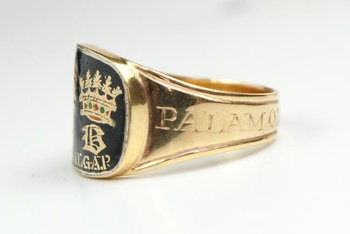 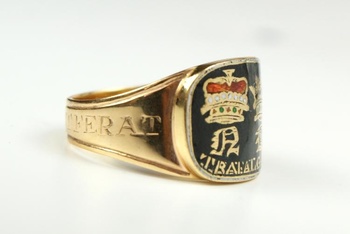 A rare memorial ring commemorating the death of Admiral Nelson at Trafalgar. As was customary, memorial rings were produced for the Vice-Admiral's family and friends to wear. The enamel rectangular bezel is decorated with the Gothic letters N for Nelson surmounted by a Viscount's coronet and a B for Bronté (he was Duke of Bronté in the Kingdom of Sicily) surmounted by a ducal coronet with Trafalgar below, the inside inscribed, "lost to his Country 21 Oct 1805 Aged 47" and the shank engraved with Nelson's Latin motto 'PALMAN QUI MERUIT FERAT', (let him bear the palm of victory who has won it).

There is slight enamel loss to the white enamel surround and a slight scratch on the face.

Memorial rings were distributed to at least fifty-eight recipients, thirty-one of which were Lord Nelson's relatives. This ring is engraved VI (which corresponds to the ring associated with Catherine Matchum, Nelson's sister); ring was made by John Salter and its provenance is the Matcham Family Sussex by descent. Several of the 58 rings made are in National Maritime museum.

Despite persistent seasickness, his career flourished as he moved from ship to ship in the East Indies and the Caribbean, showing a flair for naval strategy. He became one of the youngest ever captains in the Royal Navy. He saw active service in the American War of Independence, in the wars of the French Revolution and in battles in the East Indies, the Caribbean, the Mediterranean and the Atlantic, with his most famous battles being the Nile, Copenhagen and Trafalgar (considered one of the most important battles in British history).

Before the battle of Trafalgar, Nelson sent a signal in semaphore to his fleet: "England expects that every man will do his duty." Nelson died in the battle; his last words were "Thank God I have done my duty." When the news of his death reached England, the king wept, as did thousands of ordinary citizens, who lined the route of his funeral.

Nelson was one of the most loved leaders among the seamen of the Royal Navy and fought side by side with his crews during many of the battles. He was wounded often, losing an arm and the sight in one eye. He lost most of his teeth to scurvy in 1782 and fought to eradicate it from his ships in later voyages.

However, Nelson's personality was complex, often characterized by a desire to be noticed, both by his superiors, and the general public. He was easily flattered by praise, and dismayed when he felt he was not given sufficient credit for his actions. This led him to take risks, and to enthusiastically publicize his resultant successes. Nelson was also highly confident in his abilities, determined and able to make important decisions. His active career meant that he was considerably experienced in combat, and was a shrewd judge of his opponents, able to identify and exploit his enemies' weaknesses. He was often prone to insecurities however, as well as violent mood swings, and was extremely vain: he loved to receive decorations, tributes and praise.

His personal life came to be as well known as his military career. He was quite a womanizer, and ultimately left his marriage to Lady Nelson, formerly Frances Nisbet, to live with his mistress, Lady Hamilton, and their child, Horatia.