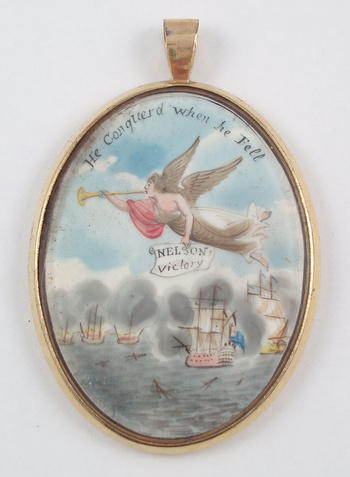 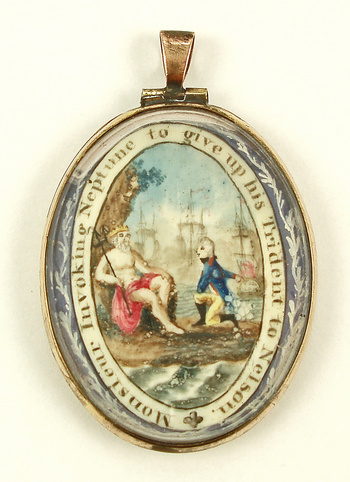 It depicts the Admiral kneeling before Neptune with border inscribed: "Monsieur Invoking Neptune to give up his Trident to Nelson", symbolizing Nelson's dominance of the sea.

The splendidly named Pierre-Charles-Jean-Baptiste-Silverstre de Villeneuve was a French naval officer during the Napoleonic Wars and in command of the French and Spanish fleets defeated by Nelson at the Battle of Trafalgar in 1805. Historians have not been kind to Villeneuve. His decision to leave Cadiz is often cited as the cause of the Battle of Trafalgar. He saw defeat by Nelson as inevitable, yet went out to engage in battle in a fit of pique and vanity upon learning that another French officer had been sent to take his place. Following defeat, Villeneuve was captured by the British, but later permitted to return to France. He was found dead with seven knife wounds in Rennes in 1806. A verdict of suicide was recorded. This verdict was widely mocked by the British press and rumors abounded that Napoleon had secretly ordered his murder.