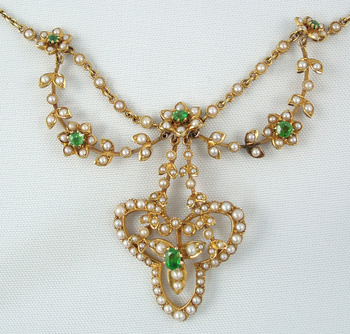 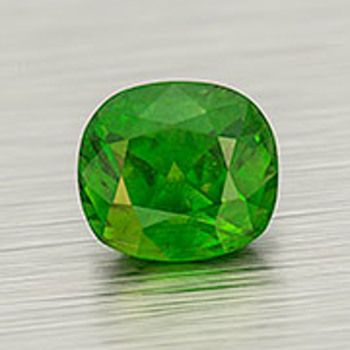 For many years, I have kept an eye out for jewelry made with demantoid garnets (or demented garnets, as a dear friend calls them). This is a selection of a few of my pieces, including an unset stone I recently acquired. I will post a second set of pictures as Part 2.

- Demantoid garnet and seed pearl necklace c 1900, English 18ct. These are particularly fine demantoids, being both large and a brilliant green color.

Demantoid is the green gemstone variety of the mineral andradite, a member of the garnet group of minerals. Andradite is a calcium- and iron-rich garnet. The chemical formula is Ca3Fe2(SiO4)3 with chromium substitution as the cause of the demantoid green color. Ferric iron is the cause of the yellow in the stone.

While garnets have been known since ancient times, the demantoid variety was not discovered until 1868 in Russia's western central Ural Mountains. The initial deposits were alluvial, but they have also been found up to 3 meters deep, with a total of five deposits of demantoid in this area.

Possessing an unusual green color and a dispersion greater than that of diamond, it quickly became a treasured and expensive gemstone. From the time of the demantoids find until about 1919, they were popular in Russia, as the famous Peter Carl Fabergé made jewelry with them. George Kunz, from Tiffany, loved them also and apparently bought up a huge supply of the stones. They are most often found in jewelry from the Edwardian period, including Art Nouveau pieces (Lalique used them frequently). I have also found them in Suffrage-style jewelry.

With the fall of the Tsar, then two World Wars and the rise of Communism, demantoids went out of style. In the 1970s and 1980s, there was some small amount of mining in the Urals. There has also been major finds in Namibia (1996, the Green Dragon Mine) and in other locations including Italy (Val Malenco, Lombardy), Iran (Kerman) and Afghanistan.

Demantoid is the green variety of andradite garnet, so demantoids are always primarily green (by definition), but the exact shade ranges from a very strong yellowish green to nearly the color of a fine emerald. Some stones have a brownish cast, which is due to iron. Its dispersion (0.057) is unusually high, and this is often visible as "fire" (rainbow-colored flashes of light), although in some cases the stone's green body color can render this effect less noticeable. Their luster is adamantine. Demantoid also has a high refractive index of 1.80 to 1.89.

Demantoids are generally small, with finished stones generally under 1 carat (200 mg) and stones over 2 carats (400 mg) are rare. Stones over 3 carats (600 mg) are very rare.

Russian demantoid often contain inclusions of chrysotile, which is a type of asbestos. These fibers radiate out from a very small crystal of chromite. These inclusions are feathery golden threads that tend to curve and resemble the tail of a horse, and are therefore referred to as horsetail inclusions. In gemology, the presence of such inclusions is regarded as 'diagnostic' for natural demantoid (i.e., these inclusions are not found in any other green gemstone). Some gemstones are more valuable for their inclusions, and 'horsetails' can be regarded as desirable features in demantoid, as they are taken as an indication of prestigious Russian origin.