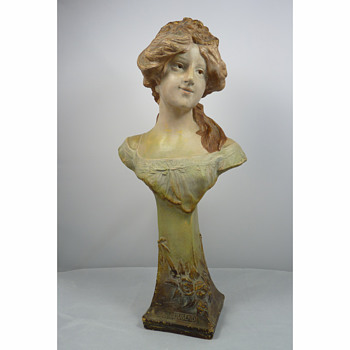 There were many Bohemian potteries producing Art Nouveau wares.

The best known is the brand name Amphora, which developed from the pottery businesses of Messrs Reissner, Stellmacher & Kessel around the towns of Turn and Telpitz.

Another lesser known pottery in the nearby town of Aussig an der Elbe, was the firm of Johann Maresch. Their pieces marked "JM" were often quite similar to Amphora.

Their best Art Nouveau productions were relatively short-lived as around 1905 they developed a niche market making garden gnomes. These became very popular and rapidly eclipsed all their other designs.

This very pretty girl is around 16in high, and is named "JUGEND", German for "Youth", and of course the name "Jugendstil" (the youthful, or new style), is the equivalent German phrase for Art Nouveau.

It is signed to the rear "August Otto 1903", (Otto was the firm's leading designer).