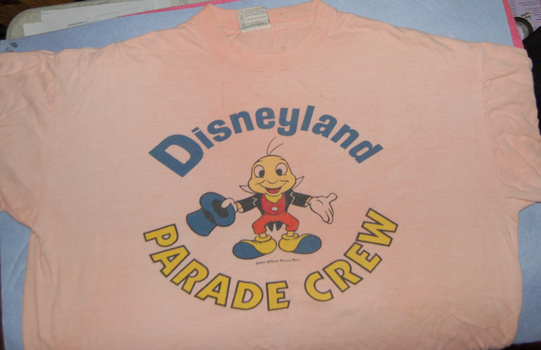 This T-shirt that was issued by Disneyland's Costuming department to parade workers. We usually wore them under our regular parade costume. (In my case, I was one of the Knights on horseback in the Christmas parade, in the early 90s. I would wear this shirt under my shirt of mail and backstage between parades.) The T-shirt is kind of a peach color, it has a picture of Jiminy Cricket on it, and it says "Disneyland Parade Crew". I don't think it was ever sold to the public, and they were returned to costuming after use (usually :D ). It is an extra large size.
Have any of you ever seen one of these shirts before? I'm trying to determine a value for it and need to find a place for comparison.