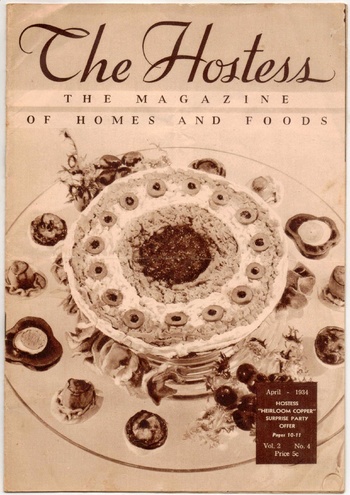 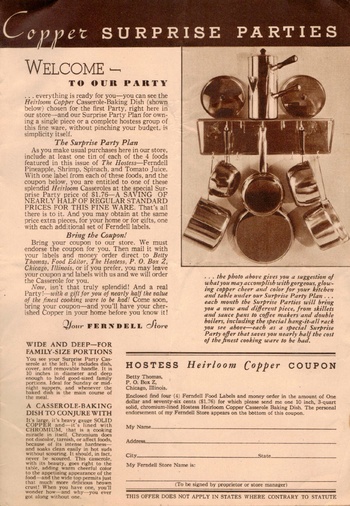 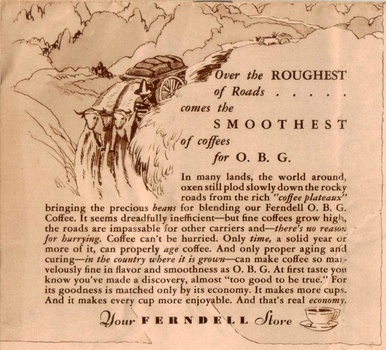 - April 1934 issue of "The Hostess - The Magazine of Homes and Foods"
- Vol. 2 No. 4 / Published by The Sprague, Warner Company, Chicago, Ill.
- Sponsored by Ferndell Stores and Heirloom Copper Cookwares
- Contains recipes and household tips / paperback magazine / 12 pages
*** The Sprague, Warner Company was incorporated in Chicago in 1909,
which would eventually descend into the Sara Lee Corporation in 1956.
Ferndell Stores was a Sprague, Warner Company subsidiary wholesale grocery which originated from the Ferndell Coffee Brand (since 1862 - one of the oldest coffee brands in America). In addition to coffee, they also carried tea, fruits and other staple foods. They were also famous for their "Richelieu" and "Batavia" brands. - The original Ferndell Stores is currently in operation in Los Angeles as Ferndell Coffee Roasters.
The "Heirloom Copper" is an advertisement for hosting parties to sell their wares (similar to later Tupperware parties) and also a coupon where you could remit Ferndell Food Labels to trade for the various cookwares.