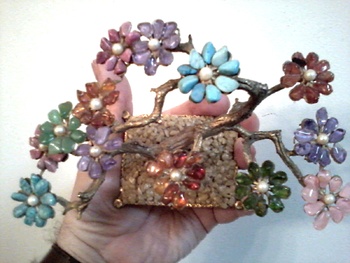 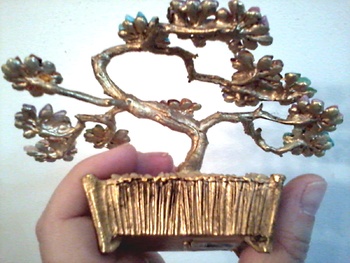 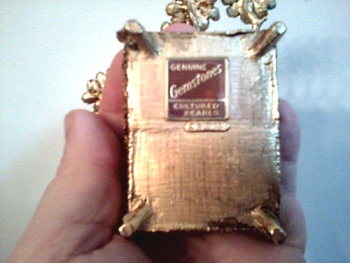 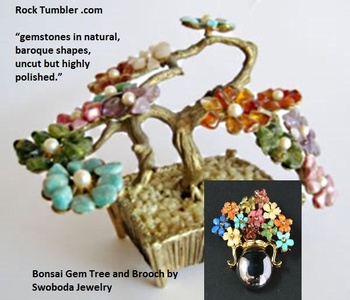 Here's today's pick from Salvation Army. A bonsai of semi-precious gemstones and cultured pearls. It measures 7" across the top at it's widest and stands 4 1/2" tall. Cast in a heavy base metal and gold plated. Made by Swoboda Jewelry around the early 1950's.
Described as follows :
A Swoboda bonsai-style gemstone tree in a small planter with fused quartz gravel. The tree has several beautiful gemstone flowers, each formed by several tumbled stones surrounding a central pearl. The flowers were made from tumbled amethyst, aventurine, citrine, rose quartz, peridot and amazonite.
They made a lot of beautiful tumbled stone jewelry as well. Rocktumbler.com site has tons of info about their jewelry and trees. A great read . -Mike-

The popularity of tumbled stones in the United States was kindled by a jewelry project launched by Edward Swoboda of Los Angeles in the early 1950s. Mr. Swoboda was a mineral dealer who received a shipment of tourmaline and beryl that was of lower quality than he had hoped for. He decided to craft some of the colorful specimens into smooth baroque shapes, polish them by hand and mount them in jewelry.
His experiment was an enormous success. People wanted more jewelry than he was easily able to make by hand. What a great problem to have! He knew that he needed a way to mass-produce baroque-shape stones with a high polish.

Invention of the Electric Rock Tumbler

Mr. Swoboda collaborated with Warren Jones and they produced a “gem tumbler” that processed crushed gem materials into beautiful baroque-shaped stones. The concept of their machine was a rotating barrel into which crushed gem material was loaded along with water and coarse silicon carbide grit.

The machine turned the barrel day after day as tiny pieces of grit were rubbed between the gem particles. This abrasion rounded the gem particles and smoothed their surfaces. After a few weeks, the pieces of gem material inside were tumbled into nice rounded baroque shapes with smooth surfaces. The stones were then sanded with smaller sizes of grit, then cleaned and buffed to a high luster in the barrel with a rock polish. This was the same procedure used when polishing stones by hand, except it was done in a barrel to many thousands of stones at a time!

One of Swoboda Jewelry’s ads from a 1952 issue of Lapidary Journal described the stones as:
“gemstones in natural, baroque shapes,
uncut but highly polished.”
This was a great way to describe the stones! “Uncut” and “highly polished” were absolutely true!
The Swoboda Jewelry product line grew into large collection of brooches, necklaces, earrings and other jewelry items. Each of the pieces was adorned with some combination of small tumbled stones, pearls, beads and simply-cut leaves.