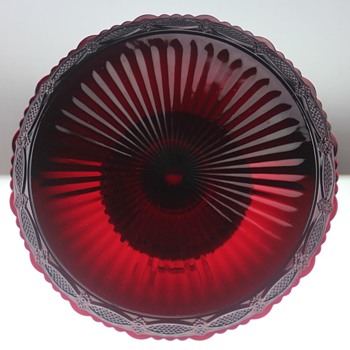 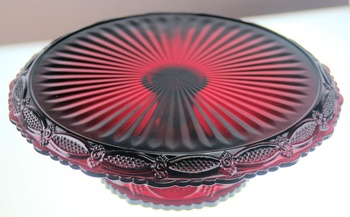 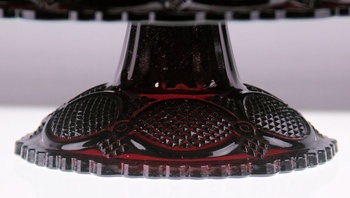 The '1876 Cape Cod collection' was made for Avon cosmetics; ©Avon mark inside base. Known to collectors as "Cape Cod", the Wheaton Glass Co. first made this pattern for Avon in the 1975. The pattern was made into 1993, and advertised as the "1876 Cape Cod Collection". All items in this pattern were made exclusively for "Avon", and various forms were used to market their products, such as bath oils, perfumes, colognes, etc. The "Cape Cod" series was a great success for Avon, as consumers fell in love with both the pattern and beautiful intensely deep ruby red color, which was formulated to Avon's specifications. Avon selected the "Roman Rosette" pattern made by Boston & Sandwich Glass c1835-50 as the basis for the design of their Cape Cod collection.

Many of the detailed design of this prized glass were produced by Boston & Sandwich Glass Works, founded in Cape Cod in 1825. Other companied in the region competed, but the popularity of “Sandwich” pieces resulted in the name becoming a generic term for pressed glass.

Inspired by the lacy delicacy of these designs, especially the classic “Roman Rosette” pattern, Avon has created the unique collection. Not only does it recall the beauty of this quality glass, but its name commemorates both the spirit of 1876 Philadelphia which celebrated the 100th Anniversary of the Declaration of Independence, and the area where Sandwich glass originated.