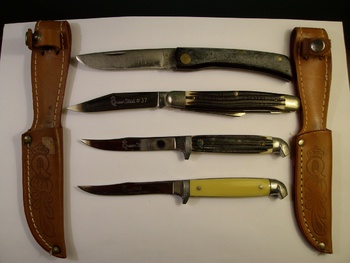 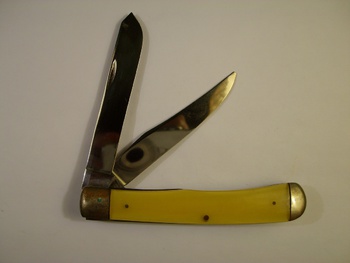 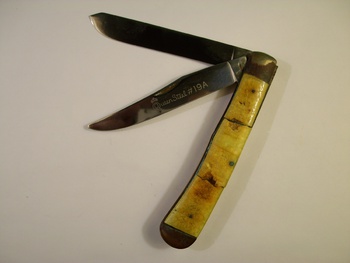 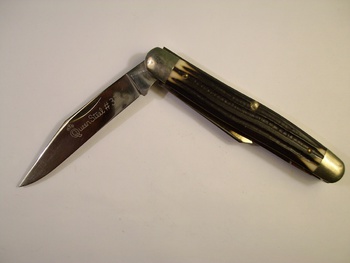 Someone said that "Queens Steel" knives were a good knife. Well I had a couple and next thing you know I had a few more. The 1st one I had was from the 1920's or earlier. It's the knife in pic 2 & 3 and it was granddaddy's. I think that if I could round up all the queens steel knives I own and grab the examples from the boat, the truck, the tackle boxes and all the drawers, I'd have maybe 25. Of course of those 25+ knives I have, 3 or 4 that are other types such as several folding "Buck" knives which look the same but are just in three different sizes. And several others are "Case" knives. I like knives. I guess all guys do. I've been a knife collector/hoarder for as far back as I can remember. The only example in the above knives, that is not a Queen Steel example, is the top knife in pic one, and it's an old "Case" knife that goes back with me to about 1970. I am unsure why the handle of the knife that belonged to my grand father in pic 2 & pic 3 is perfect on one side and looks like it was left soaking in a solvent laying on the "black" dashboard of a truck that went to 110 degrees in the shade daily for many many moons. I can't figure that out. I actually had not seen this very old knife for a very long time until recently, and am unsure as to what happened. But I'm still keeping it.