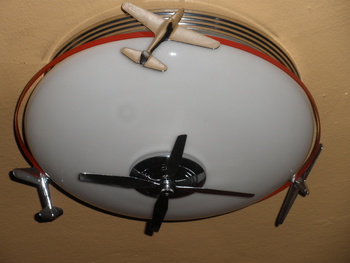 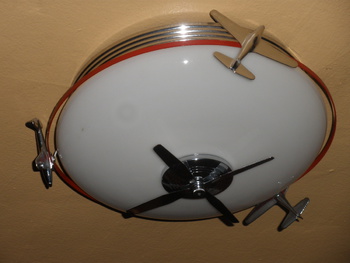 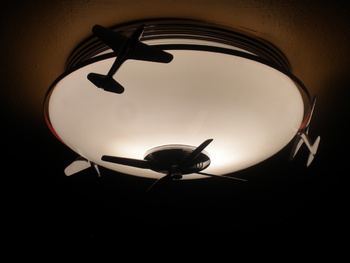 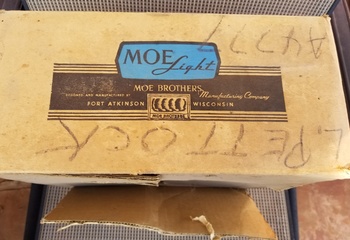 Here is the rare, whimsical, airplane Art Deco ceiling light fixture I have in my bedroom, circa 1930-1940. It was designed by The Moe Brothers Inc of Fort Atkinson Wisconsin. Henrik and Moe were brothers from Milwaukee, Wisconsin. The two brothers, along with some other entrepreneurs, were the owners of the Moe-Bridges Co., a lighting fixtures manufacturing company, formed in 1919. Problems within the management led to the exit of the two brothers from the company in the late 1920's. The brothers formed a new lighting fixtures company and called it the Moe Brothers Manufacturing.

When I bought it, it came in it's original box and was probably never installed before. It's also shown in Jim Linz's "Art Deco Chrome" book. Three chrome airplanes circle the white milk glass globe on a red enameled band. There's also a chrome propeller below the light globe and the base is fluted chrome. I always get a lot of compliments on this fixture from visitors at my home because it's so fun and unique!