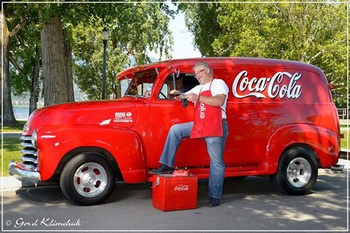 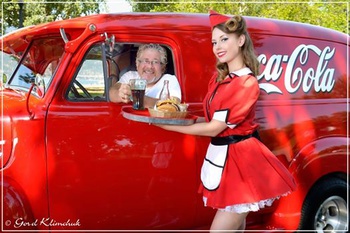 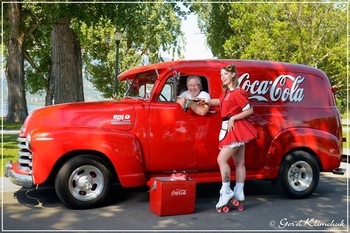 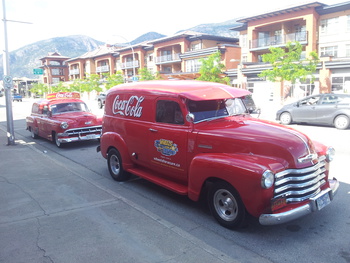 This is my little "Baby" it was built as a tribute to my late father who passed away in the spring of 2001. An old school friend called on day to tell me he was selling the PANEL (his old licence plate). His dad was going to sell him his 69 Electra Glide Harley. He was a little short and he sold me his panel for what he needed to get the Harley. I played around with it for a couple of summers I installed a 261 Pontiac motor and a split bench out of a 72 Dodge Dart GT. THEN one night while cruisin in Winnipeg an Old friend Donny Haldane asked if he could use it for a MOVIE POPULATION 436 So of to Maaco for a quick HOLLYWOOD paint job YES BACK TO ARMY GREEN (The same colour it left the Canadian Chevy Plant on March 9th 1953)
So they had my truck a little longer than they thought they would because of weather delays etc. We had agreed to $100 per day so after 32 days I had my truck back and $3200 bucks towards the repaint.
Well we had fun for the rest of the car show cruisin season placing ARMY PROPS around it and I worked on a few more movies and the searies "Falcon Beach" and used my truck as a tool hauler.
That winter it went into the body shop WELL TWO BODY SHOPS BUT THATS ANOTHER LONG STORY.
So the photo' you see now are over the last few years now out here in Peachland BC Canada. I do drive it alot out here and had plates on the first week in march. This years project will be the interior. I have placed power heated black leather seats out of a Chrysler 300M into it and will begin with reclaimed oak and more leather for accents and fine details.
I am a Board Member on the www.Peachlandworldofwheels.ca and we host a car show every Sunday of the May longweekend. This year May22
I am having a great time showing of "THE BEAST"
I drove it out to Peachland from Winnipeg with the stock 411 rear end and 3 speed tranny screaming for another gear all the way. We have many cruisin events in the Okanagan and I try to attend many. I also love to go hunt for great Coca-Cola item
I hope you enjoyed my little story of MY FAVORITE CHEVY PANEL
if you want more info or photo's e-mail chev53@shaw.ca