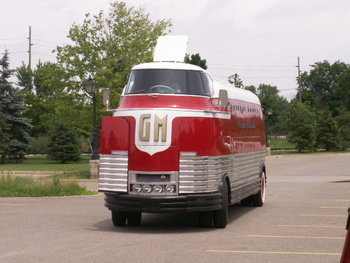 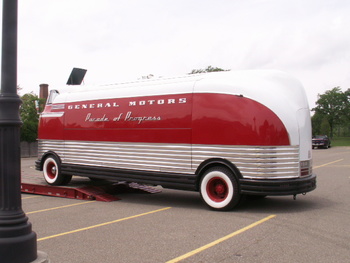 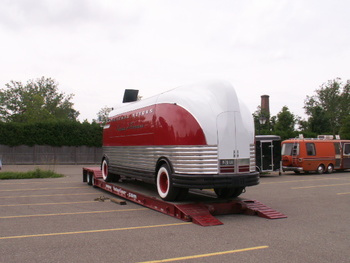 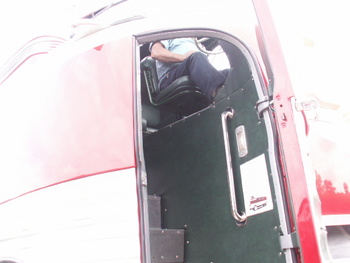 This is one of the GM Futurliners used in GM's Parade of Progress tours that began at the 1939 New York World's Fair and lasted until the 1956 parade was cancelled.
This one I have posted before, but deleted it with hundreds of other post.
I think it deserves another post.

From the GM Heritage Center site:
The General Motors "Parade of Progress" was a large, multi-faceted road show that began touring across America in 1936. It represented an investment of millions of dollars and thousands of man hours. To a country reeling from first depression and then war, it brought the future to hundreds of small towns and rural communities. Its stage show and animated exhibits presented a dramatic picture of the cavalcade of American progress, telling how scientific research and engineering helped improve lives. A jet engine, radar, diesel-electric power, television, an electric ping-pong game with stereo sound, and a microwave oven were shown to amazed audiences.

The Parade was staged by a group of 57 men, most of them young, single, and recent college graduates. They met the public, lectured at the exhibits, and ran the stage show. They also drove the vehicles, put the Aerodome tent up, tore it down, and did anything necessary to make the big show run smoothly.

The Parade of Progress stemmed from an idea by Charles Kettering, famed inventor and GM Research Director, who wanted to bring the story of industry and research to people throughout the country. It was originally built around eight streamlined vans, accompanied by all of GM's latest new cars. The original Parade started touring the country in 1936. The second Parade was launched from the 1939 New York World's Fair and featured 12 purpose-built Futurliners, a giant 152-foot by 80-foot silver exoskeleton Aerodome tent, 26 major exhibits and over 44 vehicles. With the outbreak World war II the tour ended: It had visited 251 towns and small cities in North America, reaching more than 12 ? million people. The idea was revived in again 1953, but in 1956 the third and final Parade was cancelled.
The Futurliners were specially built to carry animated exhibits. On the show lot, their 16-foot side panels folded out to form marquees and stage platforms. Lighting towers pushed up from their tops and they had their own public address systems. The GM Heritage Center has the only surviving Parade of Progress Futurliner display: "Our American Crossroads". It is a 10-minute mechanically animated display that covers 50 years as small town America is transformed by the automobile.