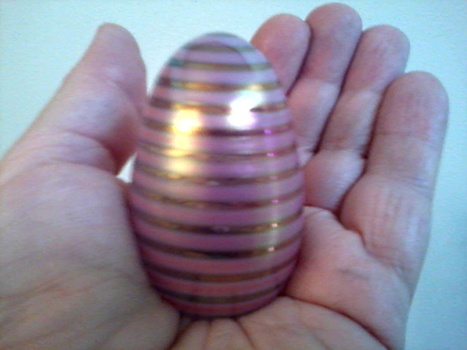 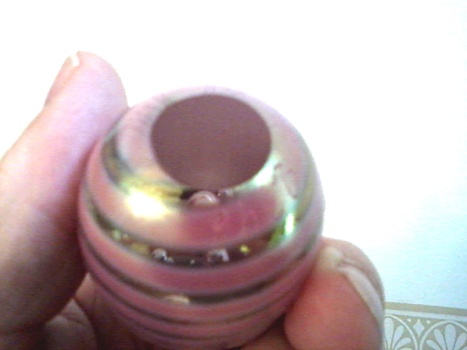 I almost walked right by this little bitty egg mixed among all the other odds and ends at Salvation. I think it's too small to call it a paperweight but it does have an interesting origin. It's actually made using the volcanic ash from Mt. St. Helens in Washington state. The May 18, 1980, eruption spewed volcanic ash over 11 states. The deadliest and most economically destructive volcanic event in the history of the United States. The ash is unique in that it contains 68 percent silica which makes it perfect for glass making. From what I've read the Mt. St. Helens Volcanic Ash Glass Works recently lost it's lease and is no longer in business. However, some of the local shops have bought the remaining inventory and you can still buy pieces from them. This little pink striped egg is signed and dated around the edge of the polished bottom. -Mike-

In the early ’80s, Lloyd Gladson was working in the parts department of an automobile dealership when he met glassblower Steven Hank Claycamp, founder of the Original Mount St. Helens Volcanic Ash Glassworks. Claycamp originated the idea of adding the mountain’s ash into glassworks in June 1980, when he discovered that the volcanic ash contained 68 percent silica, a major component of glass. The resulting glass took on a unique green tint and became a popular item among tourists wanting a piece of the famed mountain.
Gladson eventually left his auto-parts job to work as Claycamp’s apprentice. After years of study, Gladson mastered the craft and, in 2003, he purchased the business from the retiring Claycamp.
“I’ve worked with Lloyd since he was an apprentice and I’ve seen his work get better every year,” says Paula Lux, the glassworks’ office manager.
While there’s still novelty to the glassworks because it contains Mount St. Helens volcanic ash, it’s Gladson’s craftsmanship that has collectors scrambling for his original, handblown artwork.
“We have Lloyd’s pieces all over the house,” says Jean Toepfer of Vancouver, Wash. “Whenever we travel north, we always stop by the shop and pick up something new. We give them as gifts, plus we have about 50 very artistic pieces of our own.”
Gladson expects to be making his art for years to come, as he has a 10-ton stockpile of ash, gathered right after the eruption, that he keeps in dry storage. Currently, it’s illegal to gather ash from the eruption area.
Together, he and his apprentice, Mike Anderson, 21, create more than 10,000 pieces of art each year, sometimes as many as 100 pieces in a day.