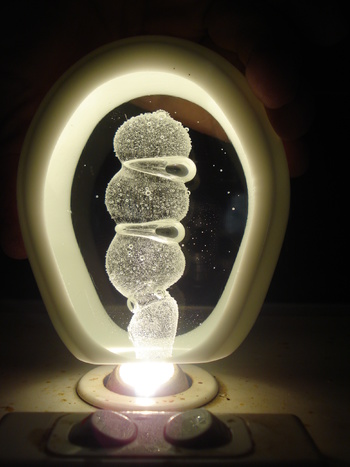 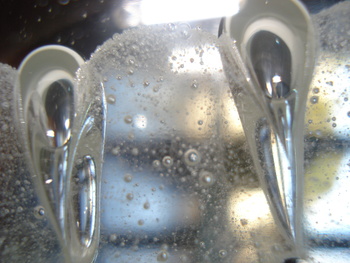 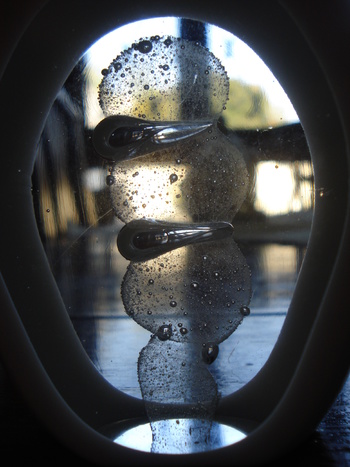 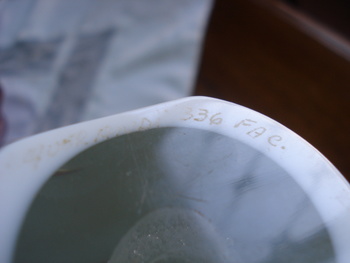 Yesterday Sergio surprised me with this wonderful glass sculpture. It has 11 cm high and 10 cm width, 1kg weight. We had seen it a few days ago in one of the shops of Belgrano street where we had bought the Pugo vase I posted two weeks ago. I got in love with this ethereal image like a piece of transparent but turbulent universe inside a white immaculate chapel, almost my personal representation of GOD, someone had shared my most intimate feelings. It is signed, last picture Querandi 336 FAC, the initials of the designer and the identification of the artisan.
Now I would say something about Querandí (name of aborigines of the Santa Fe province in Argentine) facility that has produced and exported art glass and lamps that have a really good price here and abroad. In the web page of the firm Optul http://www.optul.de/en-home-milestone.php you can read the following
1950 to 1954
Otto Ullmann becomes the technical manager of the glass factory Bohemia Glass Argentina SRL in Santo Tomé after his emigration to Argentina. Otto and Hubertus Ullmann test together in numerous sample melts of South American raw material and minerals for the production of massive and overlay coloured glasses.
1957 to 1976
Hubertus Ullmann evolves the family owned factory Cristaleria Querandi S.A. to the leading colour glass factory in South America after his resettlement to Buenos Aires. Among other things he tested the neutralization in glass of radioactive waste for the Argentinean Nuclear State Direction. He produces the well known Annagelb by using Yellow Cake instead of uranium oxide, at the same time he invents two new Yellow Cake colours Rosanil and Braunil.
1978 to 1982
Hubertus Ullmann remigrates to Germany and is now owner of the Hubertushütte located in Osterhofen. Beside the main production of high- and full-lead crystal, coloured solder glasses for insulating vacuum proof electric feedthroughs. Changing market dynamics and tightened environmental regulations are forcing him to close the glass factory.
The facility closed without paying the indemnization to the employees in 1992. Then in 1994 it was open again by Gustavo Viau a cineast that had worked in Highlander II: The Quickening filmed in Buenos Aires during 1991 that had to find a special sphere of crystal that Sean Connery had to break, The facility was open till 1994.
One of the main designers during the sixties were Alberto Churba http://www.fundacionkonex.com.ar/b54-lI-Alberto-Churba, Víctor Carroza http://www.miriamchandler.com/descargas/articulos/53.pdf, Rosendo Tellechea https://www.facebook.com/RosendoTellechea, Celina Castro http://www.fvsa.com/_ldi/LDI.pdf
Thanks for any commentary about it.