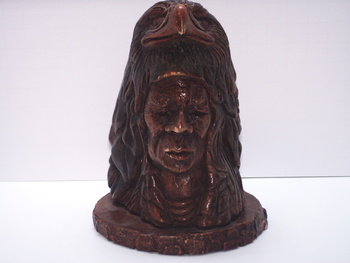 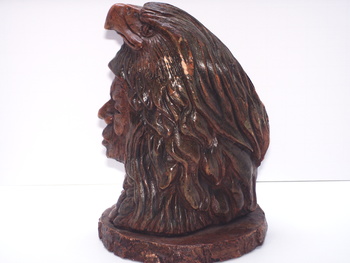 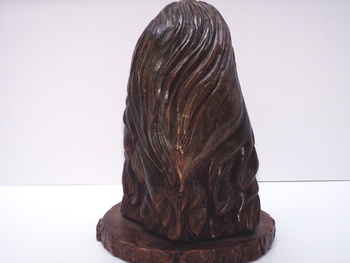 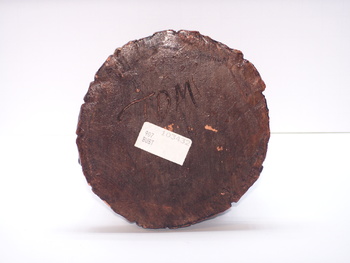 Hi
Everyone.
POST 2/3
Those of you remember 3 month ago i found a Carving by Thomas B.Maracle"The Spirit Guide"was lucky at that time even found that at the thrift store, well today i was browsing some Yard Sale in my area, and i found 3 pieces from him at the same house, all of them was sign.
Thomas B Maracle his a Well none Native American from Belleville Ontario.
This stand 5.25 inch tall, 3.25 inch wide, on a 3.75 inch base.
Title "Bust"

Thomas B. Maracle is an award winning native stone sculptor and musician as well as a successful entrepreneur. Thomas is a Native North American Mohawk, born in Belleville, Ontario in 1949. He is a citizen of the Six Nations Iroquois Confederacy and lives on the Tyendinaga Mohawk Territory near Deseronto Ontario Canada.

Since childhood, Thomas has been involved in native art. He was deeply influenced by the skills of his artisan parents who created arts and crafts for their gift store. They continue to be an influence in his personal and professional life.

Thomas has gained international acclaim as a sculptor for his ability to take a piece of virgin stone such as alabaster, steatite, marble or soap-stone and with vision, talent, and skill, set free images of the legendary people, animals and spirits of his native culture. Thomas has grown to love the physical, mental and artistic challenges required to bring to life, in his sculptures, the ancient legends of his people using the many different types, shapes and sizes of stone.

Thomas speaks of his late parents: “My father, Andrew Maracle Sr., was an international lecturer and historian, dealing with the folklore, culture and customs of the North American Indian, and my mother, Lillian Maracle, was a gifted artist in pencil and brush. With this combination of talents flowing in my veins, I have a wonderful foundation on which to develop my own abilities as a sculptor and musician”.