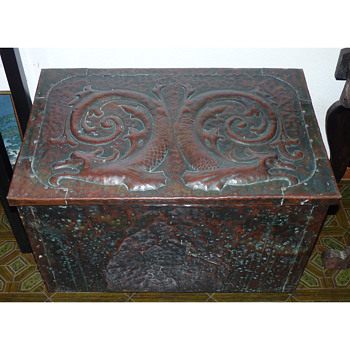 John Pearson was one of the greatest British metalworkers of the Arts & Crafts movement.

He was influenced by William De Morgan and early in his career worked for him as a pottery decorator and made associated metalwork, for example tile mounts.

He was a founding member of the Guild of Handicraft in 1888, but was dismissed (or resigned) in 1892, reputedly for not working exclusively with the Guild, and supplying pieces to Morris & Co. Pearson then worked for the Newlyn School in Cornwall, possibly as a tutor.

The chest or wood box shown above is big, it's 19in high x 26in wide x 17in deep. Although unsigned it is very much in the style of Pearson. The double monsters design is very effective and has a strong Arts & Crafts flavour.