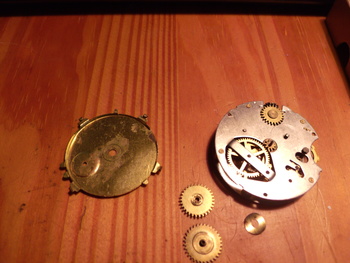 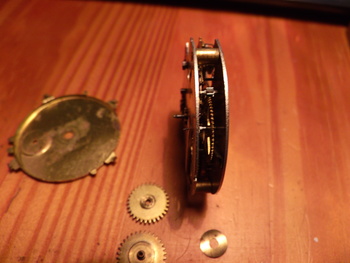 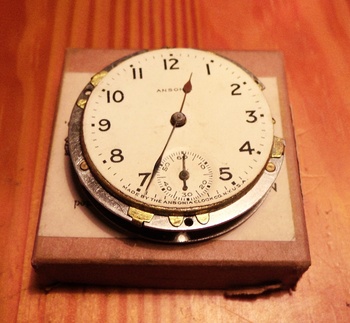 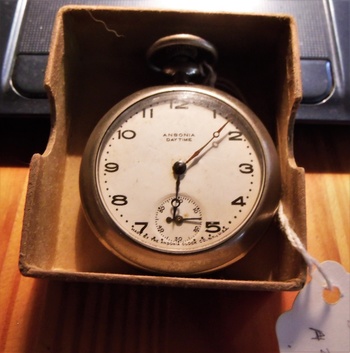 Hello Friends and Fellow Collectors. The other day, fellow patron pw-collector(Dave), posted a new found treasure for his collection. It was a 1922 Ansonia pocket watch attached to an ashtray. He tried to get it to run , but to no avail. So with a little coaching, I told him how to remove the movement from the fixture, where he could check it out. Mean while he had another regular pocket watch same manufacture and almost same year he took apart first to see how the removal worked before attempting the close order removal on ashtray model. Well after removal and reassembling the other...it wouldn't wind up or set the time. So long story..... I told Dave to box it and the other movement and send to me to look at.
The complete piece was nothing Dave had done, the ratcheting lock had worn down and wasn't locking into the main spring drum gear cog, so disassembled the watch and replaced the lock lever and reassembled and serviced it....ta-da....done deal
Then the "OMG" experience begins.... The ashtray watch was suffering "Cancer" from 93 years of second hand smoke..... that yellowish sticky build-up was through out the entire movement, the balance wheel wouldn't ever rock with help from a toothpick......YUK is the key word. I disassembled the movement and placed in an ultra-sonic clearer, and soak it for about an hour....removed it and inspected the parts and pieces....Holy Crap Batman...still covered in the crude, so reverted to something a little stronger.....GUNK carburetor cleaner and cotton swabs, cleaned each and every part of this little patient on the surgery table. Then reassemble the basic movement and reemerged the complete movement in the sonic cleaner, removed after about 15 minutes, serviced all the pins and pivots with syntactic watch oil and wound the beast up on bench....with a little CPR, it began to come back to life.....Yea....
well came to the final step, mounted the face plate, dial and hands, and noticed the second hand was not correct one, so dug thru the "Transplant" box and found correct one. Upon completion of the surgery, I wheeled it into the recovery room, gave it a full wind-up and monitored it for the next couple days, doing minor adjustments to the hairspring for timing....after 3 days of ICU monitoring, I've boxed both of these patients to send back home.
Thanks for looking and Thanks to Dave for the "Therapy" while I'm sitting at home.
Doc Tick-Tock