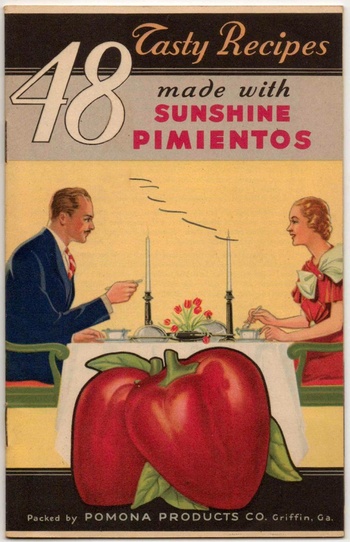 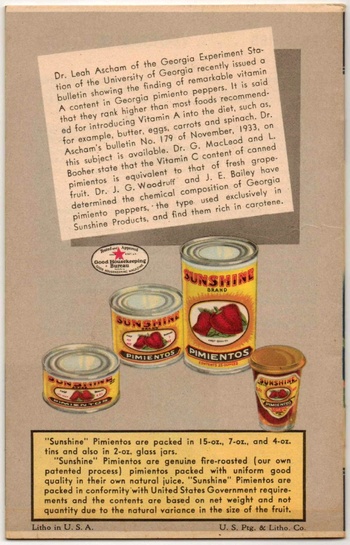 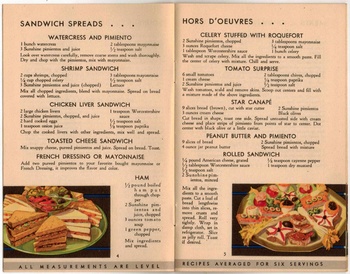 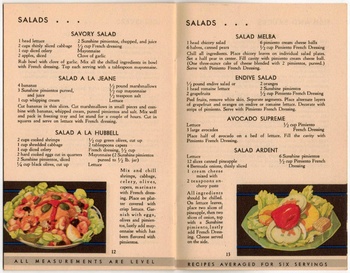 "48 Tasty Recipes made with Sunshine Pimientos" - Recipes Booklet
- ©1934 Pomona Products Co., Griffin, Georgia
- 15 page recipe booklet using Sunshine Pimientos brand product
- No one in the South had even heard of a pimento pepper until well after the Civil War. Through most of the 19th century, the word "pimento" meant allspice, the unripe berries of the Eugenia Pimenta evergreen from Jamaica and the West Indies. The spice was popular throughout the U.S., and oil from Jamaican pimento berries was prescribed as a purgative and toothache remedy. - Pimento was not used as a term for red peppers until the 1880s, when sweet peppers from Spain began being imported to the United States packed in tin cans and soon after, recipes calling for "sweet Spanish peppers" began appearing. By the late 1890's, Americans were calling these imported peppers by their Spanish name, pimiento. Soon the “i” was dropped from common usage, and by the turn of the century most print accounts of the peppers call them "pimentos". Their bright red color helped liven up salads and other dishes with their mild, sweet flavor. While the peppers were popular throughout the country, the South--specifically, the state of Georgia--became the center of the American pimento industry. Pomona Products Company beagan to can them commercially in 1914 after inventing a roasting machine which made peeling the peppers easier. By the 1920's, a flourishing pimento industry had developed in and around Griffin, Georgia, with over 25,000 acres under cultivation by 1938, and the Pomona Products Company alone was producing 10 million cans per year. California growers began competing with Georgia around this time, but the Georgia remained the leading producer of the little red peppers until the 1960's.