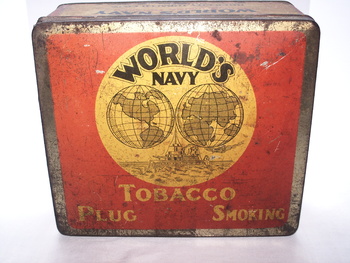 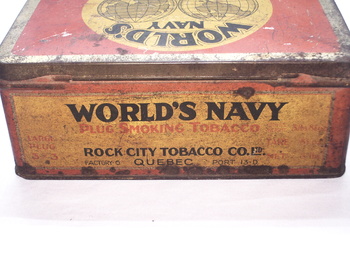 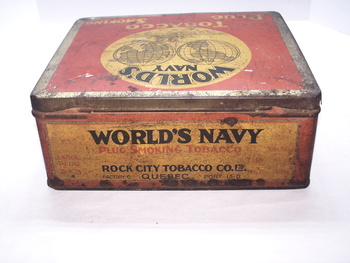 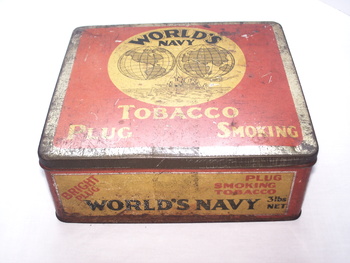 Hi
Everyone.
I have this advertizing tin box almost 25 years now, i found this inside an old barn at Quebec City, for being 90 years old, the graphic on that one are in pretty good shape. World"s Navy Tobacco Plug Smoking was all around North America, this particular tin is from Rock City Tobacco Co Ltd, Quebec City(Scarce).

Thanks for Viewing.
Alan.

Rock City Tobacco was founded in 1899 in Québec City, Québec. In their early years, they specialized in making pipe tobacco, snuff, and chewing tobacco. In 1936, Carreras Ltd. of London, England bought a 70 per cent. share of the company, making Rock City its Canadian subsidiary. Rock City kept its own identity, and was able to manufacture Carreras' brands in Canada, such as Black Cat, Craven "A", and Turf. Other brands made by them in this period included Corvette and Sportsman, among others.
In 1958, Rock City's parent company was merged with Rothmans of Pall Mall in the United Kingdom. This led in 1960 to Rock City becoming acquired by Rothmans' Canadian subsidiary, which had just recently established itself in Canada. The deal was completed in 1963 when Rothmans of Pall Mall Canada finished buying the remaining outstanding shares of Rock City.
Today, Rock City's Québec City plant is still being used by Rothmans, Benson & Hedges, as Rothmans of Pall Mall Canada is known today, and its name is still in use as a subsidiary, most notably on the Number Seven brand.