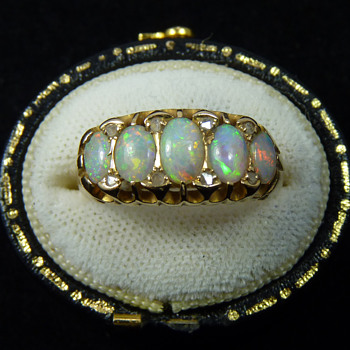 The second major discovery of opal in Australia was made in 1889, at White Cliffs in New South Wales.

The White Cliffs opal was found in the soft white sandstone that gave White Cliffs its name. The opal was easily freed from the host sandstone, and came out in flat pieces that looked like shards of window glass.

White Cliffs was a pale to transparent opal without the backing of dark host rock like boulder opal, so it didn't show boulder's intensity of colour, however White Cliffs was much easier to mine and to cut into cabochons.

Tullie Woolaston was the first buyer at White Cliffs, and he grew the international market for the stones quickly. By 1897 there were 3,500 people at the diggings, and Woolaston was reputedly selling well over £100,000 worth of stones per year in Britain.

The white or crystal opal you see in Victorian and Edwardian jewellery is almost certain to be White Cliffs opal, which rapidly became popular in a wide variety of jewellery, from mass produced brooches and pendants through to the diamond encrusted jewels of the upper class.

The "London Bridge" style of ring shown above were produced by the Birmingham jewellers of the late Victorian to Edwardian period, and the higher quality ones like this that include diamonds are now sought-after collectors pieces.