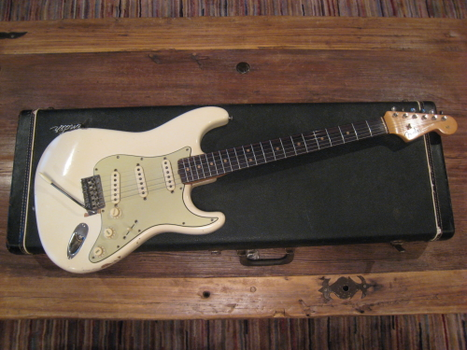 Fender Stratocaster serial L14985 manufactured 1963. Owned and used by jimi Hendrix, with a notarized letter from his brother, Leon Hendrix, which recalls Jimi having this guitar at his home in Benedict Canyon, L.A. in 1968, and also taking it to Juggy Sound studios in New York. There is a further notarized letter from Leon with more information: that the guitar was subsequently given to the studio owner and was used as an in-house instrument until the owner’s passing. It also comes with photos of Leon holding and playing this guitar. A real “insider” guitar with a unique provenance, signed and notarized, from Jimi’s own brother, Leon Hendrix. It’s the real deal!