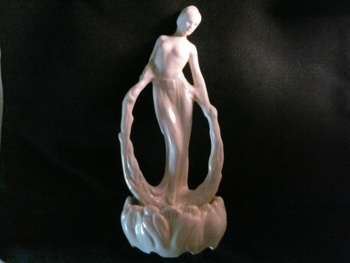 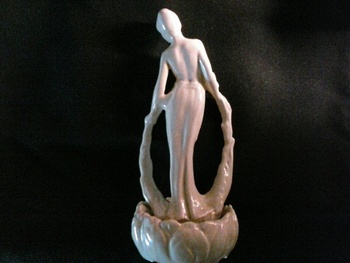 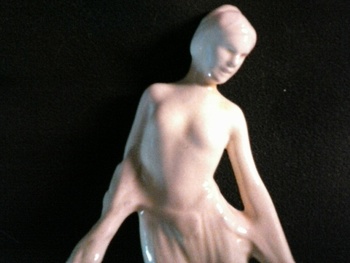 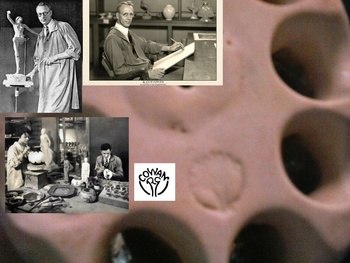 I finally found something to break my late Summer drought at the thrifts. This lovely lady came from Salvation Army this morning. She was hiding in the back of a middle shelf so I walked by her a few times before she caught my eye. The mark on the bottom looked familiar to me but it was faint so I took it over to one of the windows. My suspicions were correct it was a Cowen Pottery piece and a good one too in their special "Ivory" glaze. It has a somewhat creamy yellow cast to it unlike a pure white. They made many of these beautiful "Art Deco" figural flower frogs along with other wonderful pieces for a very short period of time. My online research found this information about this great local company.
"Originally formed as the Cleveland Pottery and Tile Company by designer, potter and teacher R. Guy Cowan, the Cowan Pottery Studio, which operated from 1913 to 1931, produced outstanding and technically extraordinary pieces, which brought international recognition to American Art Pottery. The expertise of the talented artists and chemists in residence allowed them to create distinctly modern forms and glazes during its short-lived existence that have rarely been reproduced. Cowan's best-known contribution to flower arranging – and among his most coveted works – is the figural flower holder. Cowan produced dozens of these remarkable patented designs, which were largely responsible for the pottery's success of the mid 1920's. Sadly, even as early as 1929 Cowan’s business began to suffer financially as competition to sell art pottery intensified. The Stock Market crash and the onset of the Great Depression eventually spelled doom for his pottery as the public had no money to spare on non-essentials. The company went into bankruptcy in early 1931 and closed its doors for good in December of that year. After the studio closed, Cowan spent the rest of his life as the chief designer for Syracuse China and a judge and trustee for the National Ceramic Exhibitions. He died of a heart attack while vacationing in Tucson, Arizona, in 1957 and is buried in Rocky River, Ohio."
I also read that Jackie Kennedy Onassis collected Cowen frogs and many other types. Her collection was sold during the liquidation of her estate for a tidy sum. Laurel's in excellent condition with a few factory flaws (glaze misses and pits) but no chips or breaks. Score!! -Mike- 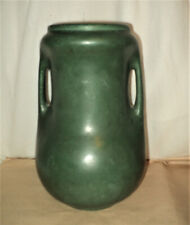 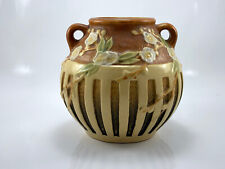