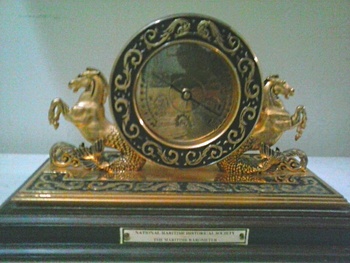 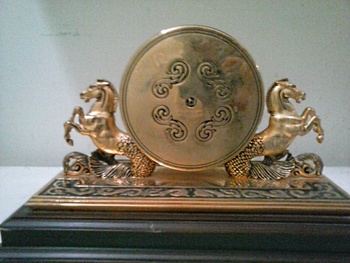 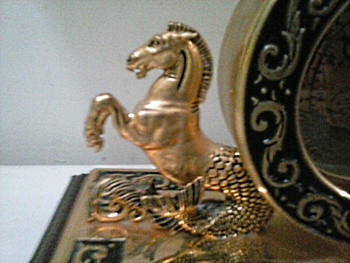 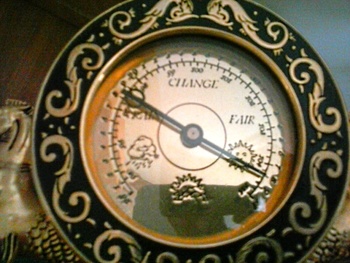 This is actually quite a nice piece although Franklin Mint is usually known for making collectibles that never attain any real value in the future, much like the Bradford Exchange and plates. Made for the 125th anniversary of the clipper ship Cutty Sark . The barometer is made of brass and pewter with 24kt gold accents. It's part of a National Maritime Historical Society collection that also includes a chronometer, compass, and other objects from the ship. It's a fairly heavy piece weighing in at about five pounds. The gold is quite nice and does a good job of imitating fire gilding. The wood base has suffered a few knocks and a chipped corner but it's still an eye catcher. Courtesy of Volunteers of America and worth every bit of the five it cost ! -Mike-

The Cutty Sark is a British clipper ship. Built on the Clyde in 1869 for the Jock Willis Shipping Line, she was one of the last tea clippers to be built and one of the fastest, coming at the end of a long period of design development which halted as sailing ships gave way to steam propulsion. Cutty Sark is listed by National Historic Ships as part of the National Historic Fleet (the nautical equivalent of a Grade 1 Listed Building). She is one of only three remaining original composite construction (wooden hull on an iron frame) clipper ships from the nineteenth century in part or whole, the others being the City of Adelaide, which arrived in Port Adelaide, South Australia on February 3, 2014 for preservation, and the beached skeleton of Ambassador of 1869 near Punta Arenas, Chile.
The ship has been damaged by fire twice in recent years, firstly on 21 May 2007 while undergoing conservation. She was restored and was reopened to the public on 25 April 2012. Secondly, on 19 October 2014 she suffered minor damage in a smaller fire.