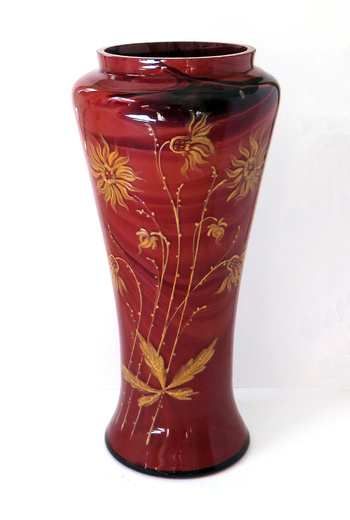 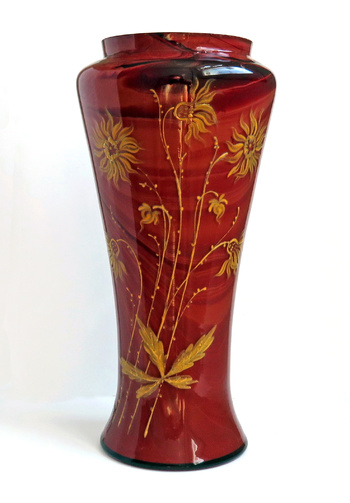 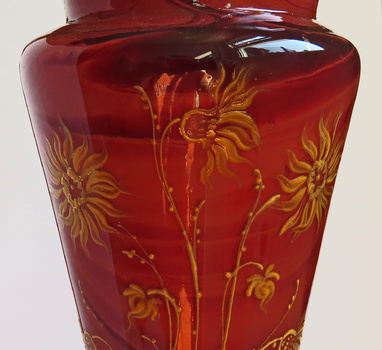 Rindskopf vases with enamel decoration are quite unusual to find, and I have been hoping to add one to my collection for a long time. As soon as I came across this vase, I knew I would do whatever I could to make sure it was mine! :) This example has quite a three dimensional ochre-colored enamel that is then accented around the edges with gold gilt; the rim is also finished in gold. I really love the swirling sun-like feel of the flowers. The vase is an opaque marbled deep red glass and stands 8.25in tall (21cm); I have a smaller vase by Rindskopf in this same type of glass.

I have hesitated a few weeks to post this vase, since I have had such a hard time getting pictures of it that I feel do the enamel work justice – it has been so hard to photograph and to get it to look as beautiful as it does in person. I hope these pictures give some idea of it.

Many people may not know that Rindskopf did all sorts of work in-house – not just the making of the glass itself. Here is a very interesting description of their work, taken from an article in Pressglas-Korrespondenz 2003-4 titled ”Glassworks Josef Rindskopf at Kosten Revealed” by Glen & Steve Thistlewood:

“…Initially, at Dux [one of Rindskopf’s factories near Teplice, opened in 1891], much of the output was coloured blanks that were sent to glass refineries in Haida (Nový Bor) to be finished off (decorated, etched, painted etc). Within a year or so, however, all Rindskopf's glass was finished off at their own factories. At Dux, new equipment was installed so that etching, painting, sandblasting and so on, could all be carried out on the spot. Iridescent Art Glass, as well as Crackle Glass and Frosted items ("eisglas") were made at Dux.”

Based on this information, I feel the vase could very likely have been decorated by Rindskopf themselves, and not necessarily by an outside refiner.

I hope you enjoy this vase as much as I do!