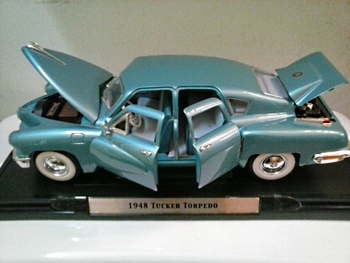 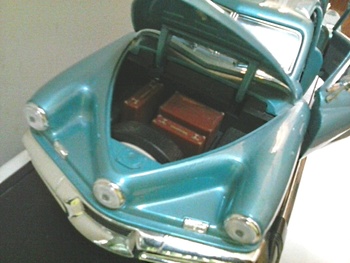 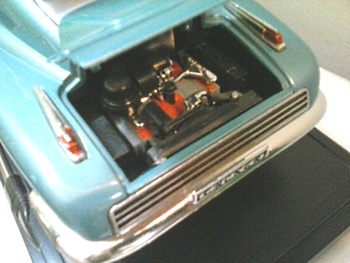 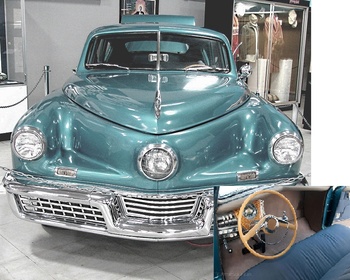 Someone donated a huge plastic tub with a collection of 1/18 and 1/32 diecast cars to Salvation last week. A couple of the 1/18 cars made it into the showcase. One of which was this 1948 Tucker Torpedo. It was the only one with it's base too. Nice detail. Doors, hood, and trunk open and even the steering wheel turns the wheels ! Yes, you know me... I did let it sit till half price day before buying it. Not sure of the maker though, probably Road Legends or another diecast maker. While I was there another customer bought the whole tub at a bulk price but, it was mostly the smaller 1/32 cars. He did leave the three larger 1/18 ones in the case for some reason. ( Note: I later found out he did buy the rest after I left with the Tucker).
Since the movie's release, everyone pretty much knows Preston Tucker's sad story as to why these cars never had a chance. Of the 52 cars built 47 remain in various conditions in private and museum collections. One documented car was even rumored to have been used in a "Bash A Tucker" fundraiser in 1950. It was found abandoned along the banks of the Mississippi River in Memphis completely destroyed. However, the transmission was rescued and is in the AACA Museum in Hershey PA. The prices are astronomical if and when these cars ever hit the market. In 2012 Barrett Jackson sold one just like this model in Scotsdale Arizona for an incredible $2,915,000.00 !! Not bad for a car that originally would have cost just $2,450.00.
-Mike-